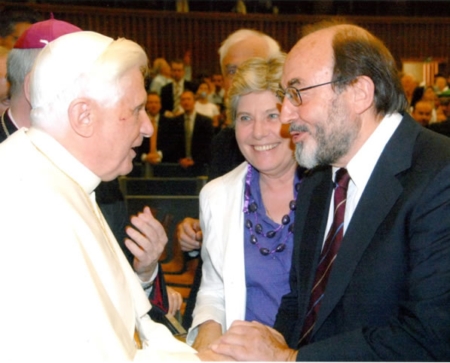 MUNICH. Germany, MARCH 5, 2011 (Zenit.org).- Accompanied in procession by three thousand people, many of them young people, Antonio Spandri's body was buried yesterday at the cemetery of Neuer Suedfriedhof in Munich. At the conclusion of the ceremony all those in attendance had the opportunity to personally pay their last respects by throwing a handful of earth on his coffin.

Toni died suddenly and unexpectedly in Munich this past February 28 while reading and discussing some texts on Christian initiation together with his wife Bruna.

The funeral of this apostle of the New Evangelization was celebrated in the morning at the filled to over-flowing cathedral of Our Lady of Monaco. Cardinal Paul Josef Cordes, President Emeritus of the Pontifical Council "Cor Unum," conveyed the sorrow of the Holy Father at the news of Spandri's death. Benedict XVI met Toni as his student in Germany more than forty years ago and since then he had always kept in touch with him.

"I invite all of you to celebrate this feast," Bruna said after thanking Munich's Cardinal Marx for having sent his vicar general, Monsignor Peter Beer, to preside at the funeral mass. "We have had the desire for the presbyters to dress in white, and not in purple, as a sign of the baptism, but especially as a sign of the resurrection of Jesus Christ."

"Dear Toni, I thank you for the love you had for me," said the initiator of the Neocatechumenal Way, Kiko Arguello, who had just arrived from the airport with Fr. Mario Pezzi to accompany Toni in this last stage on earth. "I thank you above all because with your death you have given me the gift of thinking about my own death and this has done a lot of good to me. I hope to be with you soon!"

Born in Venice in 1943, Spandri studied law in his native city and, during his studies at the end of the '60s; he lived firsthand the troubles of Fuci, an association of Catholic students: Spandri distinguished himself by a search of faith and interiority that led him to study theology at Tubingen together with his wife Bruna. Also here he found himself in a university divided by protest; eventually he got closer to Professor Ratzinger whom he followed when the professor moved to Regensburg. Through a classmate, Stefano Gennarini, he got to know the Neocatechumenal Way and later on he contributed to its introduction in the dioceses of Venice, thanks to the support of then Cardinal Albino Luciani.

When, in the parish of St. Maria Formosa in Venice the first Neocatechumenal community was born, Toni was elected the responsible.

Afterwards, together with Bruna and Stefano Gennarini, they communicated their experience of the Way to their professor.

"I was a professor at Tübingen - the future Benedict XVI wrote in 1999 remembering that encounter - and some neocatechumens came to me, including Toni Spandri who had been my student for many years and now works in Munich. These young people were touched by the discovery that the Church needs a new post-baptismal Catechumenate, where a new appropriation of Baptism on a personal and a communal level can be realized in a common journey. I, reflecting on Baptism, saw how for a long time Baptism was almost the forgotten sacrament of the Church, although it is the foundation of our being Christian. Having studied the Fathers, in particular, I learned from them that the sacrament is realized in the way of initiation and therefore I was very happy to know the beginning of this new experience. What the Neocatechumenal Way had understood, was precisely that, although we have been baptized as infants, we still need to enter in the reality of our Baptism, we must throughout our life, in different steps, naturally enter in this initiation to communion with Christ in the Church. I was very happy that a way of renewal of this fundamental Church experience was opened; this is particularly important at this present time in which the family and the school are no longer, as they were in times past, places of initiation to faith and the Communion with Christ and his Church."

It was precisely Professor Ratzinger the one who introduced the Way in Munich by writing to two pastors, who were friends of his.

"I believe that all of us are grateful for the fact that Toni has been the one who has given a light to the Pope," Cardinal Cordes said during the funeral. "We are also grateful for everything that the Way has given to the Church."

In 1974 Toni and Bruna, who had two children at that time, left everything -- even their inherited company -- to become itinerant catechists responsible for the Neocatechumenal Way in Germany and later on in the Netherlands as well. This radical decision -- Toni would say it with great gratitude towards Kiko, Carmen and the Way -- had saved him from the sadness of a meaningless life and had given him a true freedom. He would always tell his children that since God had called him to follow him "wine and joy had never been missing on his table."

Toni and Bruna opened the Way even in the then communist Germany, crossing many times "Check-point Charlie," the border point between the two Berlins: several times they got arrested by the "vopos" (the communist police) and spent nights in cells interrogated by the communist guards.

Fr. Mario Pezzi, in his homily, brought out the intensity with which Spandri has contributed to the New Evangelization. "He gave himself to the service of a way that aims to accompany the Christians to rediscover their baptism, to be able to face the challenges of a secularized world. Toni and Bruna wanted to serve the renewal of the Church in the Spirit of the Second Vatican Council… For this reason they left their wealthy families to live in sobriety and simplicity for the Evangelization, opening themselves to the gift of life."

Toni and Bruna, in fact, have had ten children: Maria, the sixth, was in the clinic giving birth to her second child when her father passed away and Stefano, the seventh, had gotten married a few weeks before and had just come back from his honeymoon. Toni and Bruna have had (so far!) thirty-two grandchildren, demonstrating by their examples that the teaching of the Church, in a particular way "Humanae Vitae," not only was prophetic regarding the situation of crisis of the present-day Church, but primarily it was a source of joy and love. Many German families have followed the example of Toni and Bruna and this explains the impressive number of young people present at the funeral.

During the days prior to the funeral, Spandri's house, where Toni's body had been exposed for three days, has been visited by many people, especially youths who would tell and celebrate Toni's gift. "In these days we have truly seen the sky opened," Tobia, the firstborn and father of eight children said "and at the end of these days we can say that the power of death has been broken. For all of us, today is Easter".

For many years Toni and Bruna, in front of many difficulties in the Evangelization of Northern Europe, had always been encouraged and sustained by the Holy Father who, like them, had very much in his heart the evangelization of Germany.

Only six weeks ago, Benedict XVI sent in mission about 200 couples of the Neocatechumenal Way and inaugurated three others "missio ad gentes" in the diocese of Cologne, Germany. The number of missio ad gentes followed by Toni and Bruna had increased to seven, three in Cologne, two in Chemnitz and two in Netherlands. Each of these missio ad gentes is composed of a priest accompanied by three or four numerous families who, under the request of the bishop, receive a mandate to evangelize dechristianized and pagan areas with the mission, as the Gospel says, to make present a Christian community where "they may be perfectly one so that the world may believe." John Paul II in 1985, at the sixth symposium of the European Bishops, said that in order to give an answer to the secularization of Europe it was necessary to go back to the "very first apostolic model." Based on this, these missio ad gentes, in imitation of the "very first apostolic model," gather in the houses in the midst of the non baptized. After four years of experience many "far away" and many pagans, who would have never entered in a church otherwise, have been getting closer to these families. An atheist philosopher has thanked the missio ad gentes because without it, he would have never discovered the love of Christ.

Toni and Bruna, lately, had spent ever more energies for the missio ad gentes, an experience toward which also Benedict XVI nourishes a lot of trust and hope. Last September Toni and Bruna participated in the annual encounter that the Holy Father holds every year in Castel Gandolfo, meeting his former students for three days; on this occasion, they spoke about the next theme for the year 2011 and Toni had proposed the "New Evangelization," a theme that the Pope adopted immediately with enthusiasm.

Currently in Germany there are approximately a hundred Neocatechumenal communities, thirty of which are in the Archdiocese of Munich. Moreover, Toni and Bruna have promoted the erection in Germany of two "Redemptoris Mater" seminaries and two others in the Netherlands.

In 2005, with the help of 95 German and Dutch communities, Spandri took care of the organization of the large meeting of youth that followed the World Youth Day and during which 2500 youths manifested their willingness to follow Jesus Christ.

"Dear brothers and sisters: Toni Spandri has gone to the Father. We want to share with all of you the Word that the Lord has granted him to accompany him in his journey to heaven," Bruna Spandri wrote in a letter. "Come to me all of you who are tired and burdened and I will restore you. Take my yoke upon you and learn from me, who I am meek and humble of heart, and you will find rest for your souls. My yoke is gentle and my burden is light". (Mt. 11, 28-30). The Lord, who has granted him to carry the Cross of Christ in the Evangelization for 40 years, has granted him also to find rest in Him! Christ is truly risen!"

The whole dioceses and many brothers are crying because of Toni's loss: during the funeral Bruna concluded by saying: "to the question that many brothers of the Way are asking: 'And now, what is it going to happen?' I can answer by saying nothing else than this: 'God is faithful! If we love God and His Son, Jesus Christ, we must not be afraid!'"

Toni would always repeat, as Kiko had told him, that an itinerant dies evangelizing "with sandals on his feet," and this God granted him.