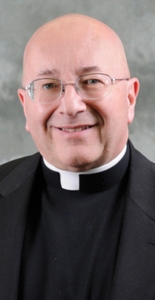 Father William Waltersheid, the vicar for clergy and consecrated life in the Pennsylvania diocese of Harrisburg was named auxiliary bishop of the Pittsburgh diocese by Pope Benedict XVI. The bishop-elect is an alumnus of the now closed St. John Seminary College from which he graduated in 1988.

In the fall of that year he was assigned to theological studies at Rome's Gregorian University and was a student at the Pontifical North American College in the Eternal City. Harrisburg's late Bishop Nicholas Dattilo, who was a Pittsburgh priest before going to the Keystone State's capital city, ordained him to the priesthood on July 11, 1992.

He served in several parish assignments of his home diocese and most recently as the bishop's point man for clergy and those in consecrated life. He had also served as vice rector of his Roman alma mater, the North American College.

Bishop-elect Waltersheid will be ordained to the episcopacy at St. Paul Cathedral in the Steel City on Easter Monday, April 25, 2011.