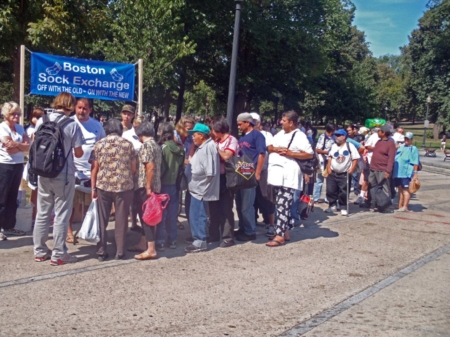 BRAINTREE -- For one Burlington priest, a winter subway ride over 25 years ago spawned an entire ministry.

On a snowy and slushy day in 1983, Father John Capuci, then a college freshman, happened to be on a Boston subway with a barefooted homeless male passenger.

"His feet were all red and raw," Father Capuci recalled. "It really bothered me that mine were warm and his were like that."

Concerned, he gave the man his socks.

"I started the Sock Exchange and have been doing it ever since," he said.

Last August, Father Capuci brought the Boston Sock Exchange to his current parish, St. Malachy's in Burlington, where he serves as pastor.

Every third Saturday of the month, around 15 parishioners from St. Malachy's distribute a peanut butter and jelly sandwich, a bottle of water, a new pair of socks and other seasonally-appropriate clothing to homeless people on the Boston Common.

Clothing is donated by St. Malachy's parishioners, and prior to distribution on the Common, a small team of volunteers makes the sandwiches.

Father Capuci said that through his parish's Sock Exchange, homeless people could receive at least one pair of new socks each month.

Mary Beth Arcaro, who coordinates the Sock Exchange for the parish, said they assist around 100 people each month.

The Sock Exchange is a "very personal ministry" for Arcaro. "You really feel like you're one-on-one helping someone," she continued.

The St. Malachy's community hopes to expand this effort soon.

"The big thing we're trying to do is get other parishes involved," said Sock Exchange volunteer E.J. Landry. "He (Father Capuci) and I have gone to different parishes. Ultimately, we'd love to have a parish per week doing this."

St. Agnes Parish in Arlington participated in the effort earlier this month. The parish sent a group of about 15 volunteers to the Boston Common on Feb. 12, where they distributed socks, hats, gloves, and scarves. A small group of volunteers also made sandwiches for distribution.

Jennifer Hermanski, who coordinated the effort for the parish, said they handed out about 130 pairs of socks, and about 35 pairs of gloves, 25 hats and 15 scarves.

Father Capuci links the ministry to St. Paul's Letter to James, where he says faith should be accompanied by charitable works.

"I've always said if you don't put your faith on your feet or your hands, it becomes dull," he said.