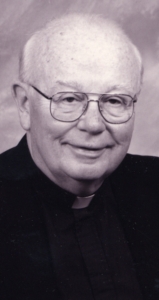 His classmate and friend of more than half a center, Bishop John Boles was the principal celebrant and homilist of the funeral Mass of Father John H. Flynn on Feb. 4. The Mass celebrated at St. Maria Goretti Church in Lynnfield where Father Flynn had served as the pastor from 1981 to 1996. He died at St. Patrick Manor in Framingham on Jan. 30, he had celebrated his 85th birthday on Jan. 16.

Fathyer Flynn was the only child of the late John and Margaret (Sullivan) Flynn of Newton. He attended local schools and on graduation from Newton High School in 1943 he entered U.S. Army. After his military service he studied first at Harvard and then at Boston College graduating in 1948. He received a masters degree in history at Columbia University in New York in 1949.

The next year he entered St. John Seminary and on completion of his studies there he was ordained to the priesthood at Holy Cathedral on Feb. 2, 1955 by Archbishop Richard Cushing.

Prior to his appointment to Lynnfield he served in several other archdiocesan assignments: First as an assistant at two parishes St. Catherine of Alexandria, Westford (1955-1957) and then at St. Thomas Aquinas, Jamaica Plain, (1957-1958). From 1958 to 1963 he was chaplain at Matignon High School in Cambridge and served briefly as a temporary assistant at Immaculate Conception, Cambridge. From 1963 to 1974 he was an assistant at St. Joseph Parish, Medford and from 1974-1981 associate at St. Paul Parish, Wellesley. The smallest and shortest of his assignments was to the then very rural Westford parish; his following assignments were to large and busy urban or suburban parishes. In 1981 Cardinal Medeiros named his pastor of St. Maria Goretti Parish in Lynnfield where he served until Cardinal Law granted him senior priest retirement status in 1996.

Looking back over his active priestly ministry at the time of his retirement Father Flynn recalled his happy years at Matignon High School where there many vocaiotns to religious life and the priesthood.

He was especially proud of his alma mater, Boston College, serving on the Alumni Board and was a stalwart supporter of the Eagles football team easily spotted at 40 yard line seats on the east side of Alumni Stadium. Often a classmate or another priest friend would be enlisted to root on the Eagles.