BRAINTREE -- The Archdiocese of Boston has formulated a Catholic schools admission policy which says schools must "not discriminate against or exclude any categories of students" while at the same time acknowledging the autonomy of parish and school officials to make admissions decisions at the local level. The policy was distributed Jan. 12.

Cardinal Seán P. O'Malley pledged to develop the new policy following a May 2010 incident that made national headlines when a Hingham Catholic school rescinded the acceptance of a child of lesbian parents.

At the time, archdiocesan officials reacted negatively to the decision but noted there was no specific archdiocesan policy covering the situation.

The new Archdiocesan Catholic Schools Admission Policy says that schools "do not discriminate against or exclude any categories of students." The policy does not define what is considered a category.

Vicar General and Moderator of the Curia Father Richard Erikson said, "Catholic education is a treasure of the Church and we want to share that as broadly as we can."

"We will not exclude any category of child from our schools and we expect pastors will be in conformity with the decision," he added.

The policy also maintains the rights of pastors, principals and other staff to develop admissions policies for their schools. "Admission is dependent both on academic qualifications and the desire to promote what is in the best interest of the student," the policy reads.

It acknowledges the "principle of subsidiarity," principle of Church teaching that says decisions should be made at the lowest practical organizational level.

"Admissions decisions are still made at the local level," O'Neill said.

O'Neil declined to speculate how this policy would have affected the Hingham case but stressed that this is the policy moving forward and it is now codified.

The Archdiocese of Boston is also encouraging schools to place their own admissions policies in their handbooks and provide prospective applicants with policy information before registering the child.

The Catholic Schools Office is available to assist pastors and principals if they have any questions on the application of the policy, O'Neill said.

She said that in formulating the archdiocesan-wide policy, officials wanted to clarify older guidelines which she said were vague.

The text of the admissions policy says that developers were guided by previous remarks made by Pope Benedict XVI, Canon Law and the United States Conference of Catholic Bishops (USCCB).

Father Erikson and O'Neill also said the policy has significance for parents seeking to place their children in Catholic schools and the pastors and principals who make admissions decisions.

Father Erikson said that the policy means that parents enroll their child with the understanding their child will be taught the Catholic faith and be required to participate in religious services that are part of the school's curriculum.

"What it means is we are dedicated to excellent faith-based education, and parents who enroll their children in Catholic schools (should expect that) their children will be taught fully the Catholic faith."

The new policy was formulated by a team of archdiocesan officials, including the Presbyteral and Pastoral Councils, principals and pastors, including Father James Rafferty, the pastor of St. Paul School in Hingham, the school which ignited the controversy in May.

"The Archdiocese has now finalized that document and I welcome the fact that we now have a clear policy to guide us in the important work of Catholic education," said Father Rafferty in a statement provided to the Pilot. 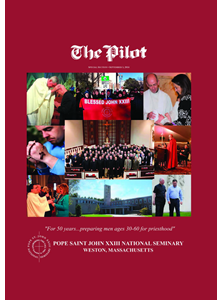