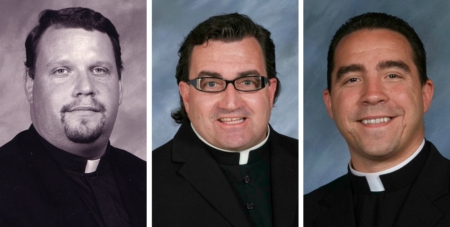 Born in Boston on Sept. 29, 1967 and raised in Weymouth, Father Thomas Boudreau attended the archdiocesan seminaries and Bernard Cardinal Law ordained him to the priesthood at Holy Cross Cathedral on May 20, 1995.

Each parish provides a great variety of priestly ministry and so good preparation for a diocesan priest who would eventually be named a pastor. With much sacramental ministry and at least one or two other priests in the rectory both parishes are "busy." An added responsibility at St. Bridget is the parish school which provides a whole different and important set of activities for the priests of a parish.

In June 2009 he was named parochial vicar at St. Ann Parish in the Wollaston section of Quincy. The parish is more like St. Bridget with its parish school and multiple activities. Father John Ronaghan, the present pastor of the parish, was high in his praise for his now former associate. On hearing of his appointment to be pastor of St. Michael Parish, Avon he said "I'm going to miss him. He's a good worker and the people like him."

With an effective date of Oct. 18 Cardinal Seán P. O'Malley named Father Joseph T. MacCarthy, up until now the parochial vicar at St. Joseph Parish in Medway, as the pastor of St. Mary Parish in Plymouth.

A Framingham native who was raised in St. Bridget parish and attended the parish grammar school and Marian High School, Father MacCarthy is one of the three living children of the late Joseph and Elizabeth (Thompson) MacCarthy. He has one sister, Pamela Donnelly and one brother, Michael; two other siblings Mary Weafer and Jean Borelli are deceased.

An alumnus of Boston College with a degree in philosophy and theology and with further study at the Catholic University of America in the Nation's capital, he entered St. John's Seminary and on completion of seminary studies he was ordained by Cardinal Law at Holy Cross Cathedral on May 17, 1997.

His first assignment was as parochial vicar at St. Mary of the Assumption, Brookline followed by a similar appointment at St. Monica Parish, Methuen. From August 2004 to July 2005 he served as administrator of the Methuen parish. Following the appointment of a new pastor in Methuen he served for almost the next year as a member of the archdiocesan response team. And on May 1, 2006 he was named to the Medway parish serving there with Msgr, Timothy Moran.

Asked about his vocational influences he cited his "parents' faith," the Sisters of St. Joseph, who taught him in both grammar and elementary school and especially Sister Virginia O'Connell, CSJ. Also influential were a number of priests among these Father Michael Guarino, presently pastor at St. Anthony of Padua, Revere who served as chaplain at Marian High School; and Father Dan O'Connell, pastor of St. Joseph in Boston's West End and familiar face to CatholicTV viewers.

Looking forward with enthusiasm to Plymouth Father MacCarthy said "I am excited to get to know the people at Mary's and to assure them of Jesus' welcome and love." Much aware that the key intersection of the priest and people is the Mass, he said "I am grateful for the opportunity to welcome people to meet Christ both in Word broken in the homily and in the Word which is His Body and Blood."

Father Jason M. Makos was born in Stoughton on Feb. 24, 1977 and was raised in East Bridgewater, attending local schools in the town. On graduating from the town's high school he obtained an associate in science degree at Massasoit Community College, then went on to UMass Boston for a semester before traveling to Boston College where he studied psychology. He entered St. John's Seminary and was subsequently sent to Rome's Pontifical North American College where he studied at the Pontifical Gregorian University obtaining first the STB and then the STL, that is the bachelor and then the licentiate degrees.

Cardinal O'Malley ordained him to the priesthood at Holy Cross Cathedral on May 21, 2005. His first assignment was actually to "go back to school" to Rome where he finished the STL degree. He was briefly parish vicar at St. Edith Stein, Brockton before returning to Rome. Returning to the archdiocese in July 2006 he was named parochial vicar at St. Mary, Foxborough. This past August Cardinal O'Malley named him administrator of Holy Family Parish in Amesbury and then on Sept. 26 named him pastor at Holy Ghost in Whitman.

He is returning to very familiar territory in Whitman for it was at this parish that under the guidance and example, of both Father Henry Boivin and Father Richard Cannon that he was drawn first to Full Communion with the Catholic Church and then to the idea of a priestly vocation. Father Makos, who has a twin brother, Justin in Plymouth -- his only sibling; was raised by his parents Stephen and Joan as members of the Greek Orthodox Church. He said that his reception into the Catholic Church and his vocation have been supported by parents, other family and friends alike.

His focus on the Mass and his desire to accompany people on their journey of faith are two of the key points of his priestly ministry. Obviously happy in his priestly vocation, when asked about advice to someone thinking of priestly life he said "It is a beautiful life. I can honestly say it gets better each day. If God is calling you to the priesthood -- take the risk!"