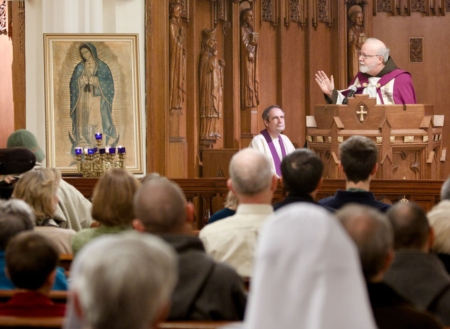 During his homily Cardinal O'Malley gestures to the image of Our Lady of Guadalupe. In this apparition, he said, Mary "has portrayed herself as the woman of Advent, the woman who is pregnant with our redeemer." Pilot photo/ Gregory L. Tracy

SOUTH END -- Filling the lower church of the Cathedral of the Holy Cross to near-capacity, hundreds of Boston-area Catholics united their prayerful intentions for the unborn with Pope Benedict XVI as they participated in an early-evening prayer service Nov. 27.

Cardinal Seán P. O'Malley led the Vigil for All Nascent Human Life for the Archdiocese of Boston. Pope Benedict XVI conducted his own vigil in Rome also on Nov. 27, the first weekend of Advent, and had asked that all diocesan bishops hold a similar service that day.

Marianne Luthin, director of the archdiocese's pro-life office, which sponsored the service, was "delighted" with the attendance, also saying that many people were "deeply touched the Holy Father made this unprecedented request."

Boston's prayer service included Scripture readings, hymns, antiphons, petitions, a homily by Cardinal O'Malley, as well as praying of the rosary. The recitation of and reflection on the Joyful Mysteries of the Rosary was led by Father Peter Grover, OMV, director of St. Clement Eucharistic Shrine in the Back Bay, and each decade of the rosary was conducted in a different language -- English, Spanish, Italian, Portuguese and Latin.

The entire prayer service was conducted in front of the exposed Blessed Sacrament.

During his homily, Cardinal O'Malley discussed the pope's request to hold prayer services for the unborn on the first weekend of Advent.

"It's a great act of solidarity with the whole world, an act of the sacredness of human life, a central theme of our Catholic faith," Cardinal O'Malley said.

He also discussed how pro-lifers should help others to understand the dignity of life.

The cardinal said that the pro-life struggle must be done with love and compassion "but we must bring the light of reason and faith to help people understand how sacred human life is and our obligation to protect the dignity of human life, even when it is most vulnerable."

Cardinal O'Malley also reminded the congregation that humanity is interdependent, and challenged pro-abortion activists who label themselves as pro-choice. He explained that the word "choice" implies autonomy.

"There can be no choice that cuts us off from the human family," Cardinal O'Malley said.

Cardinal O'Malley also encouraged those in attendance to speak with youth about the dignity of life and the importance of traditional marriage. He called for pro-lifers to work together in shaping laws that uphold traditional family values and protect the unborn.

He concluded the homily by saying the purpose of the vigil was to demonstrate the power of prayer, and saying today's Catholics should imitate the Blessed Mother in responding to God's will like she did during the Annunciation.

"We must live this Advent intensely with a pregnant woman who is Mary, who said yes to God, yes to life and yes to love," Cardinal O'Malley said. "Mary said that yes in our name at the Annunciation. Now we must show her that we are saying that same yes with her."

Attendees commented how the service united the Church and witnessed to human life.

James McEleney, a parishioner at St. Thomas More Parish in Braintree, said that the service, which joined local Catholics with other Catholics throughout the world and Pope Benedict, was a sign of unity.

"It's the unity that comes from the Eucharist, including the many people who came here today," McEleney said.

Ken Gill, a seminarian at Blessed John XXIII National Seminary who coordinates the pro-life activities there, also commented on the service.

"It's a great witness and response to the Holy Father's call today for us as we prepare for the Advent season in light of the coming of our Lord to witness to the culture of life," said Gill, from the Archdiocese of Washington, D.C.

"Seeing the crypt church here packed was a beautiful witness," he also said.