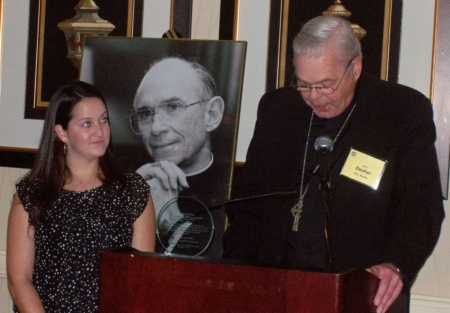 BRAINTREE -- Every year since 1998, the United States Conference of Catholic Bishops has given an award to a young adult Catholic who demonstrates his or her faith through a profound commitment to the poor and marginalized. This time, the bishops needed to look no further than the greater Boston area to find a deserving recipient.

At a Nov. 15 reception at their annual gathering in Baltimore, the bishops awarded their annual Cardinal Bernadin New Leadership Award to Janine Carreiro, 29, a Swansea native who worships at St. Thomas More Church in Braintree. Currently, she is the executive director of the Brockton Interfaith Community (BIC), a coalition of about a dozen local faith communities that works to empower citizens to bring about change in their community.

In 2005 and 2006, she was a missionary in East Timor, teaching Portuguese and English.

A statement by Cardinal Seán P. O'Malley that was read at the reception by Auxiliary Bishop John Dooher praised her dedication to the underprivileged, particularly her involvement with the BIC.

Cardinal O'Malley was absent from the meeting because he was conducting an apostolic visitation in Ireland at the request of Pope Benedict XVI.

"Her style of leadership reflects a basic principle of Catholic social teaching, 'the option for the poor.' It also reflects the distinctive contribution of the Catholic Campaign for Human Development, assisting communities throughout the United States to organize around issues of justice and human rights," Cardinal O'Malley's statement read in part. "Janine's leadership has been a unique blessing for the Brockton community in this time of economic crisis."

The award is sponsored by the Catholic Campaign for Human Development, the anti-poverty program of the USCCB, and is given to a Catholic young adult between the ages of 18 and 30 who demonstrates leadership in fighting against poverty and injustice in the United States through community-based solutions. The award is named for the late Cardinal Joseph Bernadin, former archbishop of Chicago, an advocate of poor and low-income people.

Carreiro was accompanied to the reception by her parents, as well as Father Francis Cloherty, pastor of Our Lady of Lourdes Parish in Brockton, which is represented in the BIC.

Other local Catholic organizations represented in the BIC are St. Patrick Parish, also of Brockton, and Stonehill College, of nearby Easton.

Carreiro said that the BIC has recently worked with federal and state officials to pass legislation that authorized loans for unemployed homeowners, which Carreiro estimated will provide $61 million to help about 3,000 families in Massachusetts.

Her group is also working to increase the diversity on the teaching staffs of Brockton's public schools. She said the city's student population is roughly 70 percent minority, yet only 11 percent of the teachers are minorities.

Father Cloherty also said the BIC is partnering with local police and businesses to reduce violence in the city.

"It's all about identifying issues that people are facing on a day-to-day basis and finding real solutions," Carreiro said. "It's important because it makes change happen on a policy level."

Carreiro graduated from the University of Connecticut with a Bachelor's degree in political science and Spanish prior to going to East Timor, a small country in Southeast Asia.

The multi-lingual Carreiro, whose parents are immigrants from the Azores, taught Portuguese at a high school and English at a professional school during her first year, and then English at an all-girls school in her second year.

Her missionary work was temporarily disrupted by a civil war broke out in the country in 2006.

"It was the first time I had to come to terms I wasn't as powerful as I thought I was," Carreiro said.

She spent one week locked in her house and was eventually evacuated during the civil war.

Carreiro went to live with the religious sisters she had worked with, residing in cramped quarters with at least 150 other evacuees.

During her evacuation, she said she questioned why this violence could happen.

"I actually got really angry," she said. "I spent my whole period being evacuated fighting with God. It took my time in Timor for me to realize it wasn't God's fault."

In March 2008, she joined the staff of the BIC as a lead organizer and was recently promoted to executive director. She said her missionary work has influenced her current work as a community organizer.

"It definitely grounded me in the work I'm doing now," Carreiro said. "I want to see concrete change. I want to see people have a chance.