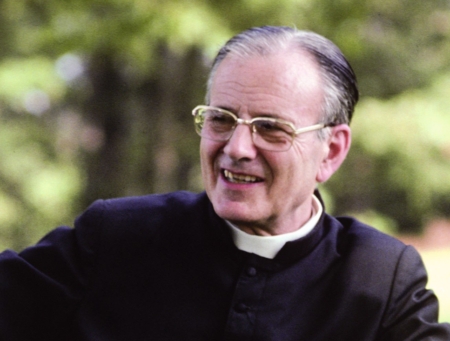 Father Joseph Muzquiz is pictured in an undated file photo. Father Muzquiz was one of the first priests to bring Opus Dei to the U.S. and ministered for many years in Boston. Pilot photo/ Courtesy Opus Dei

BRAINTREE -- Rosemary Cook, of Pembroke, was driving in her car on a snowy day nearly 30 years ago when she passed a priest trudging through the snow.

Toting his suitcase, he was in the midst of a roughly five-mile walk from a bus stop to Arnold Hall Conference Center a North Pembroke retreat house.

The mother of nine was driving alone and asked the priest, whom she knew through her involvement with Opus Dei, if he would like a ride.

Cook estimated that when she saw the priest, he was about one mile from Arnold Hall. She said the priest refused the ride, saying he preferred not to get into a car with a woman driving by herself.

"I just remember being so impressed by that," Cook, now 71, said.

The priest was Servant of God Father Joseph Muzquiz, whose cause for canonization is now being opened by the Archdiocese of Boston.

Cook met Father Muzquiz when he came to the Boston area in 1981. She recalled his humility and pastoral presence.

"He was so incredibly wonderful but so unassuming and so quiet," Cook said.

"He did so much and you never would have known it," she also said. "There's no way he would ever put the spotlight on himself."

Cook's daughters, when they were teenagers, went to then Father Muzquiz for spiritual direction. They also worked at Arnold Hall during their high school years.

"It's great to have your daughters, when they are in high school, getting spiritual direction from someone like him," Cook said.

Father David Cavanagh, an Opus Dei priest from Cambridge and who is the postulator of Father Muzquiz's cause for canonization, said that he has prayed to him and received favors, like others he knows.

"We keep track of these," he said. "That's all pertinent."

However, Father Cavanagh said he is not aware of any first class miracles that can be attributed to him yet.

"This is normal," Father Cavanagh said. "The process is just getting underway."

In order to become a saint, a person must have two verified first class miracles attributed to them -- one to be beatified and another to be canonized.

Father Cavanagh discussed the process towards canonization, noting that Cardinal O'Malley has accepted Opus Deis' petition to open Muzquiz's cause. Bishop Emilio Allue, vicar of the archdiocese's Hispanic Apostolate, is spearheading the effort on behalf of the cardinal.

Initially, witness testimony regarding Servant of God Muzquiz's sanctity had to be gathered. The information then had to be forwarded to the archdiocese to request the cause be opened.

Father Cavanagh also said that Cardinal O'Malley has requested a "Nihil Obstat", Latin for "nothing hinders," from the Vatican's Congregation of the Saints, which would indicate the Vatican does not object to moving the cause forward.

The next step in the process is to solicit input from bishops of surrounding dioceses.

Jose Luiz Muzquiz was born in Spain in 1912. He met St. Josemaria Escriva, the founder of Opus Dei, in the winter of 1934 while studying engineering. Muzquiz joined the Nationalist army after his city was taken by Nationalist forces during the Spanish Civil War in 1936. In 1940, he asked to be admitted to Opus Dei and on May 31, 1941 he was permanently incorporated into Opus Dei.

He was ordained to the priesthood on June 25, 1944. From 1944 to 1949, he developed numerous Opus Dei apostolates in Spain and Portugal. He arrived in the United States in 1949, and for two years was the only Opus Dei priest in the U.S. He helped establish Opus Dei centers in Chicago and Washington, D.C. and also laid the foundations for Opus Dei's work in Canada, Japan and Venezuela. During the 1960's and 1970's he worked in Europe and pressed for the canonization of the order's founder.

He returned to the U.S. in 1981, settling in the Boston area at Arnold Hall. He suffered a heart attack on June 20, 1983 while teaching a class on Canon Law there and died the following day at Jordan Hospital in Plymouth. His funeral was at the former St. Aidan's Church in Brookline and he is buried at St. Joseph's Cemetery in West Roxbury.

"Father Joseph Muzquiz was a good and dedicated priest who brought many people closer to God," said Brian Finnerty, a spokesman for Opus Dei. "We're happy that the Archdiocese of Boston is taking this step."