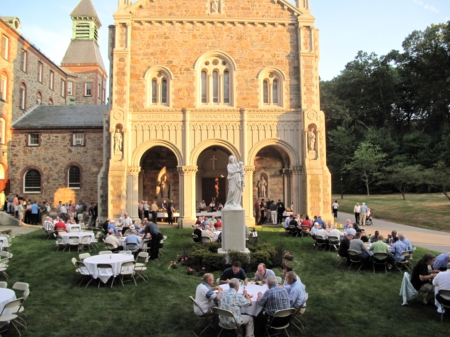 BRIGHTON -- Priests of the Archdiocese of Boston celebrated a spirit of fraternity and a sense of hope that pervades their ministries at their annual summertime gathering.

About 150 priests and seminarians of the archdiocese attended the sixth annual Vianney Cookout Aug. 11 at St. John's Seminary. The evening affair included a talk by Father Tom Nestor, pastor of St. Eulalia Parish in Winchester, vespers led by Cardinal Seán P. O'Malley and a barbecue on the seminary lawn.

The event was organized by Father Jim Flavin, the archdiocese's clergy benefits director and Michael Medas, director of clergy personnel.

"We're such a big diocese. We don't get to see each other that often," said Father Flavin. "As the number of priests gets less and less, the workload gets larger. You may not always get the opportunity to be there and support each other."

"These things are really important to us," Father Flavin added.

During evening vespers, Boston's newest auxiliary bishops, Arthur Kennedy and Peter Uglietto, recited their oath of fidelity in which they promised that they will act in accordance with canon law, uphold church teachings and act in obedience to the bishops of the Church.

Canon Law mandates that the oath be taken before assuming a Church office, and bishops are required to take it prior to ordination.

Bishops-elect Uglietto and Kennedy are being ordained on Sept. 14.

"Normally, the oath of fidelity is done privately, but I thought it was nice to take occasion of the Vianney gathering and have the priests be a part of it," Cardinal O'Malley said in his Aug. 13 blog posting.

Prior to vespers, Father Nestor gave a talk entitled "Playing the Numbers." In the talk he reminded priests that despite the fact that only 17 percent of Catholics in the archdiocese attend Mass weekly, down from 70 percent in 1970, the Catholic faith will not disappear because of the constant presence of the Holy Spirit.

"We see the unquantifiable Holy Spirit in action every day," Father Nestor added.

In spite of low Mass attendance, he reminded priests they need to see signs of hope in their work. He also told priests it is important to recognize the presence of the Holy Spirit in the churchgoers who attend Mass.

"It's the Holy Spirit that inspires you and me to leave our rooms on Sunday morning to proclaim a truth that is so compelling," Father Nestor said.

"The mission of the Church has never failed," said Father Steve Rock, pastor of St. Agnes Parish in Reading. "We can get so bogged down with all the negativity, but if we're fed by prayer and let the Holy Spirit in, it changes the whole dynamic."

"God provides. If it's his work, he will provide," Father Rock added. "We have to be open to that. The Spirit is alive and well. We just have to let him in."

Father Bill Kelly, who started the annual Vianney Cookout six years ago as a member of the diocese's clergy support office, reacted favorably to Father Nestor's message of hope.

"Everybody faces different struggles every day," said Father Kelly, currently the pastor of St. Mary Parish in Dedham. "It's important for us to be reminded that hope is one of the central virtues we live by."

Cardinal O'Malley gave a homily during vespers in which he reminded his priests need to understand the "limitations" of their human condition and be men of profound faith.

"Only a radical spiritual commitment can sustain us in our efforts to help the poor, the downtrodden, and the administration our ministry calls us to do," he said.