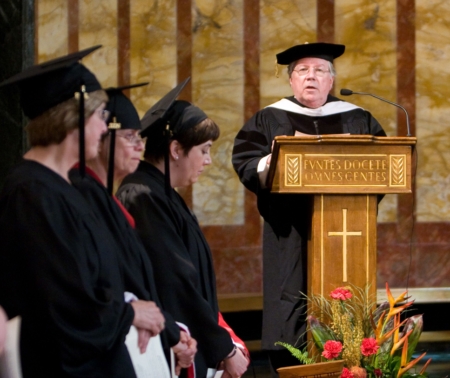 Pope Benedict XVI has named the rector of St. John Seminary, Brighton, Father Arthur L. Kennedy as titular bishop of Timidana (in Mauritania Caesariense -- present day Algeria) and auxiliary of the archdiocese of Boston. At his ordination on Sept. 14 at Holy Cross Cathedral he will be the 34th auxiliary in the more than two century history of the archdiocese.

The bishop-elect is a native of the Hub where he was born on Jan. 9, 1942 and is one of the five sons of the late Arthur and Helen (O'Rourke) Kennedy.He and his brothers Kevin, Terrence, Christopher and Brian have one sister Maurabeth. He is also the proud uncle of four nieces and four nephews.

He attended Longfellow Elementary School in Boston's Roslindale section and St. Aidan Grammar School in Brookline before entering the Boston Latin School of which he is an alumnus of the class of 1959. He entered the archdiocesan seminaries and received an undergraduate degree from the college seminary in 1964 and was sent for his theological studies to the Pontifical North American College at Rome where he obtained a licentiate degree in sacred theology from the Pontifical Gregorian University in 1967; he had been ordained to the priesthood on Dec. 17, 1966 at St. Peter's Basilica by the then rector of the North American College, Bishop Francis Reh.

On his return to the archdiocese, he was named an assistant at St. Monica Parish, Methuen serving there until being named an associate at St. Joseph Parish in East Boston where he served until 1974. During parish assignments he also attended Boston University from which he graduated with a doctorate in theology in 1978; in the early 1970s he was also a teaching assistant at BU.

For almost 33 years he served in various positions at the University of St. Thomas in St. Paul, Minnesota. In addition to serving as a faculty member at the university he was also on the faculty of its School of Divinity (1990, 1995-2000, and 2006); he was Director of the Master of Arts in Theology program at the archdiocesan seminary in St. Paul between 1993 and 1998.

His westward trek was interrupted a few times when he returned east to serve on the faculty of St. John Seminary College (2000-2001); and to Rome where he taught at the Pontifical University of St. Thomas Aquinas (the Angelicum) in Rome in 2000 and 2007.

Another "eastern intrusion" was his three year term at the United States Conference of Catholic Bishops headquarters where he served as executive director of its Secretariat for Ecumenical and Interreligious Affairs, among his predecessors in that office were two American cardinals: Bernard Law and William Baum.

The bishop-elect had strong ties to the ecumenical and interreligious