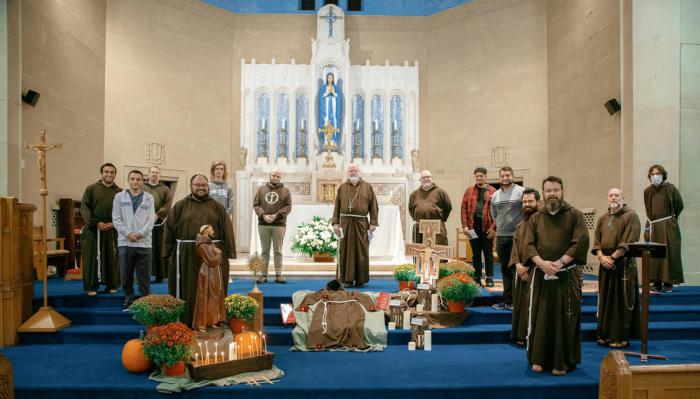 Cardinal O'Malley visits the Capuchin friary in Jamaica Plain to pray Vespers of the feast of St. Francis of Assisi. Pilot photo/CardinalSeansBlog.org

It was a great joy to be able to ordain these men. The diaconate has been a great blessing for our Church and our archdiocese.

It was also an opportunity to thank all those who are involved in our formation program as well as the deacons' wives and families for all the support that they give to their ministries.

On Saturday evening, I went to the Capuchin friary in Jamaica Plain to celebrate the Transitus of St. Francis, marking the death of St. Francis, which we celebrate on the eve of his feast day. That was also the day that the Holy Father was in Assisi to sign his new encyclical.

The following day was the feast day itself, and I was very happy to celebrate an outdoor Mass at St. Theresa's Parish in West Roxbury.

Later that night, I went back to be with the Capuchins for the Vespers of the feast day.

Recently, I was sent a book that includes some lovely paintings depicting important moments in the life of St. Francis.

The painter, Pedro Subercaseaux, was a Benedictine monk who was ordained in France and was sent to begin a foundation of the Benedictines in Chile. He was a very skilled artist and had been in Assisi and had a great devotion to St. Francis. Interestingly, he had been married, but he and his wife sought an annulment so that she could enter a convent, and he could become a monk.

Subercaseaux's nephew was a Capuchin, Msgr. Francisco Valdes, who was the first Bishop of Osorno. He was the first Chilean to become a Capuchin, and now he is a servant of God. He worked with the indigenous people of Southern Chile after he joined the order in Bavaria. In fact, his was the same province that started my province, which is why I was almost sent to Easter Island, which is a territory of Chile.

On Tuesday, we had one of our regular board meetings of St. John's Seminary.

We heard various reports on the status of the seminary. I'm very pleased to say that St. John's, like our two other seminaries, is open for instruction and doing very well. There have been no cases of COVID-19 amongst the seminarians there, which is always welcome news.

Meeting of the bishops of New England

Wednesday, we had a meeting of the bishops of New England, which brought together the bishops of the Boston Province and the Hartford Province. There were a number of issues that the Bishops Conference asked us to discuss in preparation for our virtual November meeting. Normally, we would have this regional meeting when we were all together in Baltimore, but this time we've done it virtually in preparation.