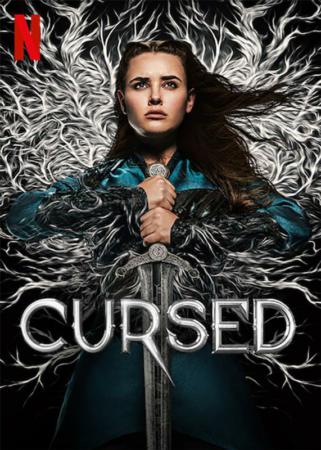 This is the TV poster for "Cursed" now streaming on Netflix. (CNS photo/Netflix)

Based on the graphic novel by Frank Miller ("300") and Tom Wheeler, who together created the show and co-wrote the screenplay with input from others, the 10-episode miniseries is streaming now on Netflix.

In addition to its graphic content, the program takes an extreme stance against the Catholic Church, branding it as a wicked, heartless institution. All members of the clergy, from the pope on down, are killers and thieves. Nuns fare somewhat better, even if the most pious and trustworthy ones also are active lesbians.

Not surprisingly, given the fantasy setting of medieval Britain, pagan rituals are lauded, and fairies (so-called "Fay" people) are uniformly praised. All of this makes for a rather unsavory witch's brew those with discerning palates will wisely choose to shun.

The central character in "Cursed" is a teenage witch named, not Sabrina, but Nimue (Katherine Langford). She's destined to become the enchantress known as the Lady of the Lake.

Those familiar with Arthurian lore will recall that Nimue plays a pivotal role in presenting Arthur, future king and creator of the Round Table, with his mighty sword, Excalibur. She is trained in the magical arts by the renowned sorcerer Merlin, her erstwhile lover.

Not so in "Cursed," a coming-of-age story that charts a very different path, one more akin to "Game of Thrones" than to Thomas Malory's "Le Morte d'Arthur."

Nimue longs to be an ordinary teenager in her Fay village, but her emerging powers mean she is destined for bigger things. So promises her sorceress mother, Lenore (Catherine Walker).

When the Red Paladins -- an army of mercenary monks sporting scarlet robes -- invade the village and slaughter its innocent inhabitants, a dying Lenore produces a blade and commands her daughter to bring it to Merlin. This is, of course, not just any old weapon, but the fabled "Sword of Power" that grants the bearer the right to rule over all of Britain.

Nimue, clueless and terrified yet determined to fulfill her mother's last request, runs for the hills. Along her perilous journey she meets a hunky young thief named -- you guessed it -- Arthur (Devon Terrell). He's insecure and untested, yet agrees to help the comely witch.

Later, things get overheated when Nimue and Arthur share a naked moment in, of all things, a Fay hot tub.

Meanwhile, holed up in a distant castle is Merlin (Gustaf Skarsgard), a drunken lout who has lost his magical powers (and, since he's also a hunk, his shirt), risking the patronage of feckless King Uther Pendragon (Sebastian Armesto). As stories spread of the young witch and her sword, Merlin thinks his luck is about to change.

Not if the Red Paladins have their way. Their extermination of the Fay people, branded a holy war, continues, with the capture of the Sword of Power a nifty bonus.

Father Carden (Peter Mullan) commands the clerical army. As Nimue (branded the "Wolfblood Witch") evades his grasp, Father is threatened by none other than Pope Abel (Clive Francis), who just happens to be passing through.

"My trinity has many godly virtues," the fictitious Holy Father intones. "Mercy is not one of them."

"Cursed" piles on the bloodshed -- and silliness -- as Nimue gradually assumes leadership of the Fay resistance. Familiar names pop in and out, including Sir Gawain (Matt Stokoe) and Morgana (Shalom Brune-Franklin), Arthur's sibling who also is a nun with the unfortunate name of Sister Igraine.