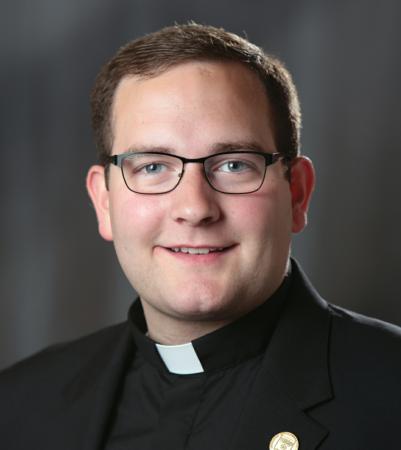 Cardinal ordains five priests for Boston, one for Society of Jesus

BRIGHTON -- Growing up in Weymouth as one of 11 children, Deacon Joseph Hubbard had many role models in faith, including his parents, older siblings, grandmothers, and uncles.

His first job was cleaning his local church on Saturdays when he was in high school. This gave him the opportunity to spend time alone with the Blessed Sacrament and get to know the parish priests.

"I always looked up to priests and saw them as role models, but I never really seriously thought about becoming a priest until probably in high school. But I didn't want to do it, so I kind of put the thought away," Deacon Hubbard said in a March 23 interview.

He studied history with a minor in theology at the Catholic University of America in Washington, D.C. He said learning how to live out the faith he had learned at home was "a very important experience" during this time.

"I had to take it on as my own. It wasn't just something my family did, it was something I was choosing to do," he said.

During his time at Catholic University, Deacon Hubbard learned about faith-based leadership by participating in various campus activities. He helped campus ministry with retreats and served on the financial board of the student government. He was also a member of the Knights of Columbus and served as the Grand Knight in his final year of college.

"My involvement in many aspects of the campus definitely helped me to come out of myself a little bit and to learn a lot about people, my peers, (and) working with others," Deacon Hubbard said.

He also went on two mission trips to Costa Rica, where he "saw the worldwide Church a little better." The priest he worked with served a parish the size of Rhode Island and could only visit the villages once every few weeks or months, traveling by horse or donkey to reach them. Deacon Hubbard said that impressed upon him the need for priests around the world, not just in Boston.

One day, toward the end of college, Deacon Hubbard and his mother attended Mass at the Pastoral Center in Braintree. Afterwards, they got into a conversation with Father Daniel Hennessey, who was the vocations director at the time. He asked Deacon Hubbard directly whether he thought God might be calling him to be a priest.

"That question changed my entire perspective," Deacon Hubbard said, because up until then, he had been thinking in terms of what he wanted to do with his life.

"The way that he phrased it made me rethink, maybe God does have this plan for me, and maybe I need to consider following that plan. Not like I'm forced to, but if God has this plan for me that's going to bring me the most happiness, to be open to that," he said.

After graduating from college, Deacon Hubbard spent almost a year working for the Diocese of Washington, D.C., where he was able to go to Mass or pray in the chapel every day and learn from the example of the priests he worked with.

One aspect of his discernment involved choosing whether to enter the seminary in Washington, D.C., or Boston. He ultimately chose Boston because it was where his family lived and he felt he knew the people better.

For his diaconate, he was assigned to Our Lady Comforter of the Afflicted Parish in Waltham. He said he has especially enjoyed performing baptisms, including several for members of his family.

"It's a great honor to be able to do that, to bring members of my own family into the Church," he said.

Deacon Hubbard said he is looking forward to meeting his parishioners after his ordination and "helping them to bring God into their daily life."

In a June 17 email, he said that he was "disappointed" when his ordination was postponed due to the COVID-19 pandemic, but he is now "excited" to be ordained at this time.

"It's definitely an exciting and challenging time, but a good time. It's a time for people to come back to the Church, reach out to the Church, maybe in ways they hadn't thought about for a while. So I feel like we have a great opportunity here. To be ordained now is certainly unique and memorable but also exciting," Deacon Hubbard said.