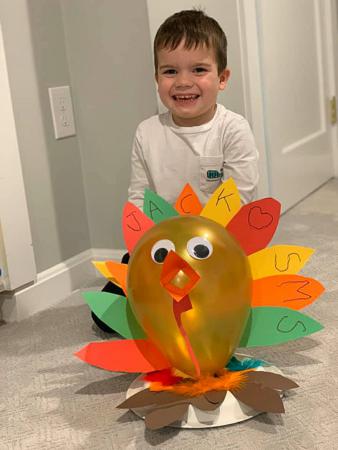 NORTH ANDOVER -- St. Michael School has introduced a new way to get students interested in STEM subjects -- Science, Technology, Engineering, and Math -- at a young age, while also giving their families a way to feel engaged with their children's curriculum and connected to the wider school community.

Each month, the students' families receive a flyer from teacher Sandra Bryant about an optional engineering challenge. The flyer specifies what materials can be used and includes a recommendation for a book that relates to the challenge.

These monthly engineering challenges are not graded, and are meant to be suitable for all students -- from pre-K through eighth grade.

"It depends on the challenge, but everybody steps it up to their grade level," Bryant said, speaking to The Pilot on Jan. 22.

Bryant has been a teacher for 24 years, four of them at St. Michael School. She currently teaches fifth- and sixth-grade math as well as an engineering class there.

"It gets your creative juices flowing!" said fifth-grade student Maya Tourkantonis, who completed the Elf on a Shelf chair challenge in December.

Bryant said it is "amazing how creative kids can be when you give them just a little bit of information. That's what I love about STEM, because everyone is different, and it shows the kids that it's okay to be different, not everyone has to have the same."

Families who attempt the challenges can send Bryant pictures or videos of themselves completing the challenge, which she then shares through the school's social media sites.

Bryant said she got the idea for the monthly engineering challenges after seeing the success of St. Michael School's STEM night at the beginning of the current academic year. The event, held last October, was attended by over 300 families.

"When I put together a STEM night and we saw how many younger kids were interested, (we thought) 'Okay, let's catch them early on.' In the future they're going to need these skills to do the jobs that they need. So the earlier we can teach them, I think, the easier it's going to be for them," Bryant said.

She said the teachers have also been taking part in professional development to learn how to integrate religion into different subjects and show how they are connected.

Students in grades five through eight take an engineering enrichment class, in which "they get to do those activities in school that bring the math and science and religion and all the pieces together."

"We want to build that from the ground up and show these little kids what they can do in this problem-solving world," Bryant said.