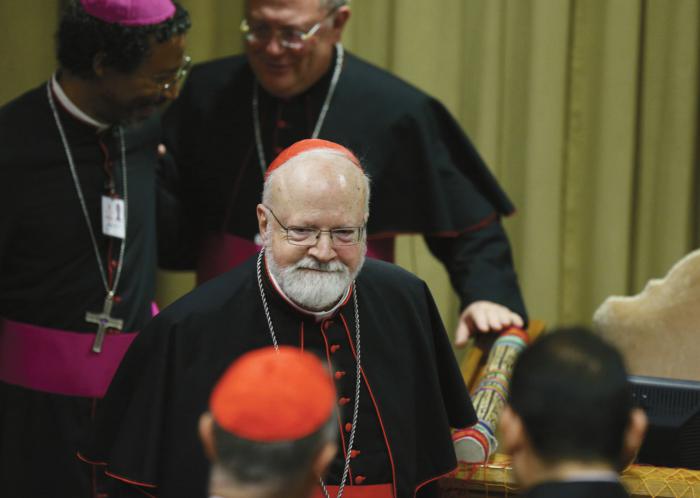 Cardinal Seán P. O'Malley arrives for the final session of the Synod of Bishops for the Amazon at the Vatican, Oct. 26, 2019. CNS photo/Paul Haring

Cardinal Seán P. O'Malley wrote about the Synod for the Amazon on a blog post on cardinalseansblog.org, Oct. 25. He was one of the participants of the synod, which took place at the Vatican from Oct. 6 to Oct. 27.

The formal name given to the synod was: "Amazonia: New Paths for the Church and for an Integral Ecology." This Amazon region that the synod concerns is 800,000 square kilometers, with a population of over 33 million inhabitants. It covers nine countries -- Bolivia, Peru, Ecuador, Colombia, Venezuela, Brazil, Guyana, Suriname, and French Guiana. It is such an important region because the Amazon forest represents 40 percent of the world's tropical forests, and their territory contains one of the richest and most complex biospheres on the planet. It is essential for the distribution of rainfall in remote regions of South America and contributes to the large movements of air around the planet. Yet, the whole area is endangered because of the destruction of the forests and pollution of the water and land due to mining, logging, and other activities. So, it really is a threat to the health of our planet.

One of the purposes of the synod is to invite people to experience a conversion in their own lives about how we use the resources of nature. I think that, in the United States, being a country that has such wealth and technology, we tend to act as if all the resources of the planet are limitless and we do not focus on the importance of having sustainable energy and resources. The Holy Father is constantly talking about the culture of waste -- of wasting resources, of wasting food -- and all this is something that we, as believers, need to consider. We need to consider how we are being responsible stewards of the gifts that have been given to us.

My fear is that, as more and more of the resources of the planet are wasted and our rain forests are destroyed, the solution that many people will embrace is that we should reduce the population of the world, so that we can maintain our high standard of living without making sacrifices or embracing a simpler form of life. So, this ecological question has many ethical dimensions that we, as believers, must reflect upon. I think that the teachings that will come out of this synod and the post-synod exhortation will focus on some of these subjects.

The other reality of that part of the world is the violence that takes place there, not just the violence against nature, but the persecution of local leaders who are trying to defend their land, and the forced migration of indigenous peoples -- people being forced out of the forest into the city, where they often live in abject poverty.

In Latin America, there have been many who have been murdered for living out their faith and others who have been murdered because of their defense of human rights and of the poor. In my own lifetime, I have personally known three bishops who were murdered in Latin America. I think that people do not appreciate the suffering and the courage of our fellow Catholics in Latin America and that the Holy Father, as he often does, is trying to call people's attention to the periphery. In this case, the periphery is the Amazon region, with its violence against the natural resources that are the patrimony of all humanity and violence against the people there. As the Holy Father pointed out in Laudato Si', these ecological questions affect the poor in a very dramatic way.

In American society, we are often protected from many of the effects of all the violence and waste that is taking place in the Amazon. However, we need to see ourselves as stewards and think about what kind of planet we want to pass on to future generations. It is interesting to me to see how young people are so impassioned by this topic. I think it is because they realize that what happens in the future will depend, in great part, on how we respond to the present crisis -- whether it is going to be business as usual, or whether we will seriously look for ways to be better stewards of the treasures that God has entrusted to us.