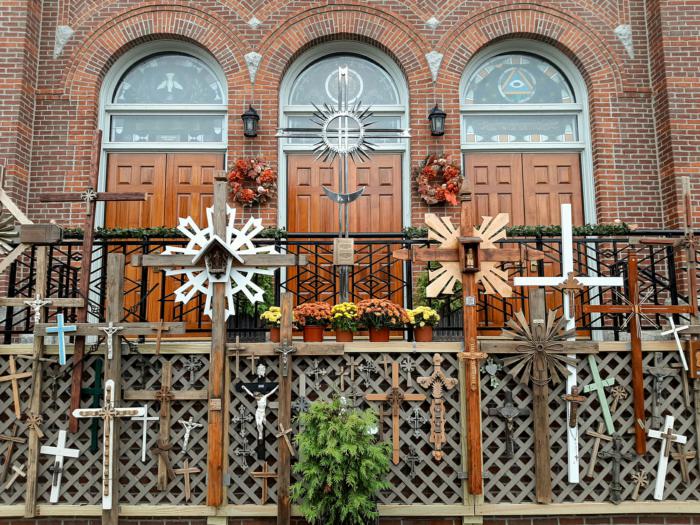 SOUTH BOSTON -- On Oct. 27, the community of St. Peter Lithuanian Parish in South Boston rededicated its "hill of crosses," which has now stood for 15 years as a sign of parishioners' prayers, heritage, and enduring faith.

The hill is modeled after the Hill of Crosses in Siauliai, Lithuania. During the Soviet occupation of Lithuania, pilgrims placed crosses on the hill in Siauliai as signs of their resistance to the atheist regime. The Soviets more than once bulldozed the hill to destroy the crosses, but the crosses returned in greater number each time. Lithuania regained its independence in 1991 but the Hill of Crosses has remained, and Pope St. John Paul II visited the site in 1993.

In 2004, St. Peter Lithuanian Parish seemed in danger of being closed as part of the archdiocese's reconfiguration plan. Parishioners formed the Friends of St. Peter Lithuanian Parish, a parish support group that would work to prevent the closure. As a sign of their hope and prayers that the parish would be saved, the parishioners erected their own hill of crosses in front of the steps of the church.

Now, 15 years later, the parish's hill of crosses is no longer seen as a sign of resistance, but as a monument to the persistence and faith of the archdiocese's small but proud Lithuanian community.

Father Aurelijus Gricius, a Lithuanian priest from the Franciscan Monastery in Kennebunkport, Maine, blessed the hill of crosses at St. Peter's on Oct. 27. The Friends of St. Peter Lithuanian Parish commissioned and erected a metal cross for the rededication.

Adomkaitis said she hopes that even if the Lithuanian parish someday does not exist, the cross will serve as a reminder that Lithuanians were once "a vital part" of the archdiocese.

"You don't want to be forgotten. Lithuanians are such a small percentage of all the Catholics in the archdiocese, but it's very important for us that our culture and our heritage, along with our religion, be remembered, and this hill of crosses is sort of a perfect reminder of that," Adomkaitis told the Pilot.

Adomkaitis said the day's weather prevented the attendees from putting in their crosses at the rededication, but the invitation to contribute a cross has been extended to everyone in the collaborative, which includes St. Vincent de Paul Parish and St. Monica Parish.

"Hopefully, it'll be there for another 15 years or more," Adomkaitis said.