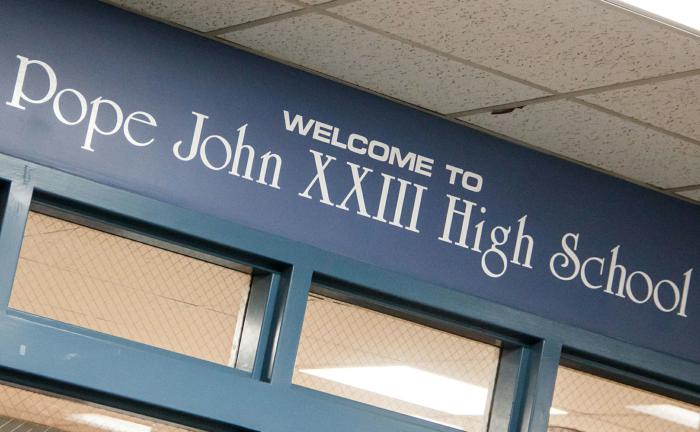 Pope John XXIII High School in Everett announced May 30 it will close at the end of this academic year. Pilot file photo/ Jacqueline Tetrault

EVERETT -- Despite efforts by alumni, parents, and students, Pope John XXIII High School in Everett announced it will close at the end of this academic year due to financial difficulties.

In a May 30 letter to the school community announcing the closure, Headmaster Carl DiMaiti said the school found itself in financial troubles after International Residence Management, a Florida company contracted to bring international boarding students to Pope John High, failed to maintain its agreement with the school. That resulted in a $1.3 million shortfall for the current academic year.

An additional $1 million would have been needed to reopen for the 2019-2020 academic year, DiMaiti said.

In late April, after the school notified its students of the possible closure, students and alumni launched efforts to raise the funds necessary to keep the school open.

DiMaiti acknowledged that "many wonderful people have stepped forward and poured their heart and soul into trying to save the school from closing. The generosity of so many who have contributed their time and treasure to Pope John XXIII High School demonstrates a strong faith community, which cares deeply for the students, families, faculty, and staff."

He said the school has "simply run out of time and resources to keep the school open in the fall."

"This is a sad day for all of us and it is not the announcement we hoped to make today," DiMaiti said.

He said all monies donated to the fundraising effort will be returned.

"Our focus must now turn to assisting students and their families in transitioning to a new school for the fall," DiMaiti said.

Pope John XXIII High School has been working with the archdiocese's Catholic Schools Office to help students enroll in other Catholic schools in the area.

Employment counseling will be provided to Pope John XXIII faculty and staff, and Catholic schools with open positions will be asked to give them priority consideration.