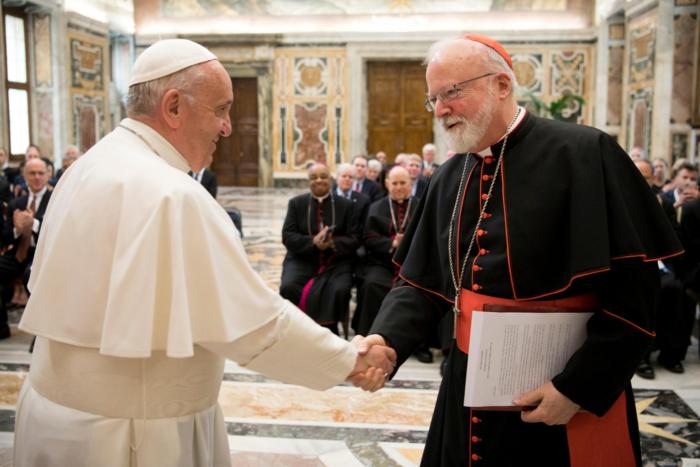 Cardinal O'Malley, as a member of the Papal Foundation, attended a meeting with the Holy Father in Rome on Friday, May 10. CNS photo/Vatican Media

I want to begin this week noting that on Tuesday we had our annual Spring Gala to benefit Catholic Charities of the Archdiocese of Boston.

I was happy that this year they honored the outgoing board chair, Jim Gallagher. He has been a great supporter of Catholic Charities over the years -- and we were pleased that he allowed them to recognize his service at the gala.

We are also pleased to welcome Kevin MacKenzie, our new incoming chair, who is a longtime member of the board. We know he will do a fabulous job.

Catholic Charities is the second largest social services agency in the Commonwealth, after the state itself. We are proud of the wonderful work they do and we are so grateful to the many benefactors, supporters, and volunteers who make the work of Catholic Charities possible each day.

Our meeting of the Congregation for the Doctrine of the Faith was on Wednesday. In fact, this particular type of gathering of the congregation is commonly known as the "feria quarta," or "fourth day," because they are always convened on a Wednesday. These are special sessions of the congregation that are called periodically to discuss important matters and form recommendations to be presented to the Holy Father. There are about a dozen cardinals who attended this meeting and, as a member of the congregation, I was requested to attend.

Thursday evening was the annual Rector's Dinner of the Pontifical North American College. The honoree this year was Cardinal DiNardo who, unfortunately, was unable to be present due to his health, though we were happy to hear a message from him and to learn that they will hold a gathering for him later in the year when he is able to travel.

Also honored during the dinner were Mr. and Mrs. George Strake Jr. of Houston.

The Strakes have been exceptionally strong supporters of the Church. In fact, Mr. Strake's father was the person who, for many years, underwrote the cost of the excavation of the Scavi, the necropolis under St. Peter's Basilica, begun by Pope Pius XII. That excavation led to the discovery of the bones of St. Peter.

Meeting with the Holy Father

On Friday, the members of the Papal Foundation had an audience with the Holy Father, and I invited Msgr. Kevin O'Leary and the Boston seminarians to accompany me.

After the audience, we celebrated a Mass together, followed by dinner at the Lateran Palace. I had never been to the Lateran Palace, so I was happy to be able to see it. It is just stunning, with many beautiful paintings, tapestries, and sculptures.

In the last few years, the Lateran Palace has been refurbished, and it looks just stunning. It is one of the original Constantinian basilicas of Rome. It is the pope's cathedral as bishop of Rome and, during the Middle Ages, it was where the Holy Father lived.

That is the palace that St. Francis went to with his first friars, seeking approbation for the Franciscan Rule. The famous story goes that Pope Honorius III had a dream in which he saw the Lateran Basilica collapsing and a scruffy friar holding it up. Then, the next day, Francis arrived. So, he was anxious to approve the rule!

On Saturday, I had dinner with our Boston priests and seminarians who are in Rome. I also asked Eduardo Verástegui and Alejandro Monteverdi, who were with us for the meetings of the Papal Foundation, to join us. Many will remember Eduardo and Alejandro for their work on films such as "Bella" and "Little Boy."

In fact, we will be welcoming Eduardo to Boston in June for the gala to benefit our Redemptoris Mater Seminary.