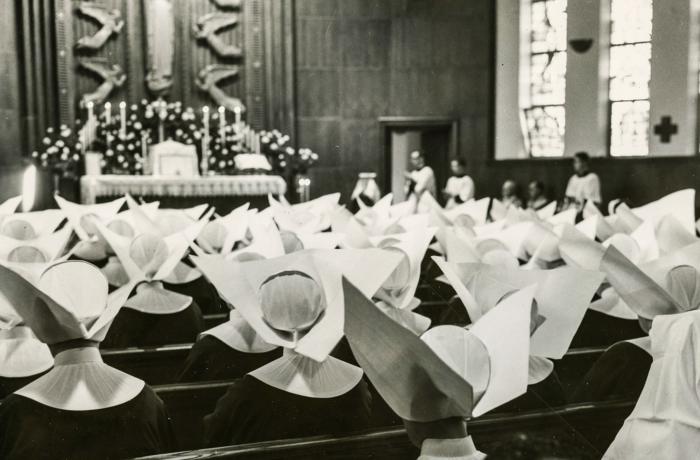 By the end of November 2018, the Daughters of Charity of St. Vincent de Paul of the Province of St. Louise will end their ministry in the Archdiocese of Boston.

The Daughters of Charity were first missioned to Boston in 1832 to assume sponsorship of St. Aloysius Day School founded by Bishop Fenwick in Cambridge. During the 1832 cholera epidemic, sisters serving at the school cared for orphaned children and established St. Vincent's Home for Girls. Through the years, the Sisters ministered in many different works -- among them are St. Vincent's Home for Girls in Cambridge; Carney Hospital in South Boston; Temporary Home for the Destitute Catholic Children of Boston that later was known as Home for Catholic Children, then opened in 1953 in Jamaica Plain as Nazareth Child Care Center; St. Mary School in Dedham; St. John Hospital in Lowell; Catherine Laboure School of Nursing; St. Mary Asylum and St. Margaret Hospital in Dorchester; St. Mary School in Franklin; Columbus Day Nursery in South Boston; St. John of God Hospital; and St. Joseph School and Parish in Holbrook.

Several factors were involved in the decision to withdraw, the Daughters said. These include diminishing number of sisters; the importance for Daughters to live in community for which they need sufficient numbers of sisters together to maintain this integral part of community life; and the presence of other congregations of sisters serving in the archdiocese.

In the statement announcing their departure, the Daughters said they treasure the relationships they have developed and the ministries where they have served in the Archdiocese of Boston.

"The community's co-founder, St. Vincent de Paul, realized from the establishment that the Daughters are called to respond to unmet needs, 'You have to be ready to go wherever you are told to go, and even to request this saying, I belong neither here nor there, but wherever God wants me to be. You are chosen to be at the disposition of Divine Providence,'" the Daughters said.

A Mass of farewell celebrated by Cardinal Seán P. O'Malley is set for noon on Thursday, March 28, 2019 at St. Joseph Church in Holbrook, 153 South Franklin Street. All who knew and worked with the Daughters are invited to attend.