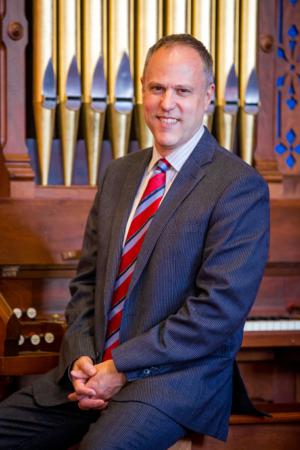 Richard J. Clark was named Director of Music for the Archdiocese of Boston and the Cathedral of the Holy Cross in September. Pilot photo/courtesy Richard Clark

BOSTON -- Though the title is a new one for Boston, most dioceses, particularly large ones, have a position relating to music, the new Director of Music for the Archdiocese of Boston and the Cathedral of the Holy Cross, Richard Clark, noted as he spoke with the Pilot Oct. 26.

Clark accepted the position in September, following the retirement of Leo Abbott, who served as cathedral music director for 33 years and was instrumental in restoring the cathedral's 1875 E. and G. G. Hook and Hastings organ. Abbott, 68, chose to retire when the position expanded to include the entire archdiocese. Clark said the archdiocese owes Abbott "enormous gratitude" and that he looks forward to building upon his predecessor's work.

Clark, who lives in Milton with his wife and four children, started playing piano around the age of six. As he sat through his two older sisters' rehearsals and recitals, hearing the same music repeatedly, he picked up melodies even before he started taking lessons himself.

The New York City native moved to Boston to attend Berklee College of Music, where he studied jazz, pop, and classical composition. He attended St. Cecilia Parish a block away from the school and started playing the organ there in 1989. Clark graduated from Berklee in 1991 and the following year he became St. Cecilia's director of music, a position he held for 28 years. He has also served as chapel organist at Boston College since 2004.

Clark developed relationships with the archdiocese and cathedral through involvement in various liturgical projects and conferences. He has directed the music for liturgies at the Pastoral Center and archdiocesan events such as ordinations. His original compositions have been broadcast on radio and performed around the world.

While the Cathedral of the Holy Cross undergoes renovations, its staff and parishioners share the limited space available for work, worship, and rehearsals. Clark's office is in the choir room, and he sometimes runs back and forth between the various Masses held each Sunday in Our Lady's Chapel and the Blessed Sacrament Chapel.

"I'm always either disturbing someone with our music, or they're disturbing us with their activities. I think it's actually kind of wonderful. We're all bothering each other in a good way. It shows that there's a lot of life" in the cathedral, Clark said.

He said he is glad Holy Cross Cathedral is also a parish, and he enjoys seeing sides of it that others do not.

"To work for a parish is some of the most rewarding work that there is," he said.

One of his responsibilities as the archdiocese's Director of Music is to provide parish music directors with resources. Since many churches are forming collaboratives, Clark said, many music directors are "being forced to operate in ways that they haven't traditionally done." Accommodating parishioners from different communities with different histories can be "complex" and "challenging," he said.

"We need to take some time to find out what kind of supports they might need, hopefully develop some relationships," said Clark.

Directing the archdiocesan choir helps him do this, he said, because it allows him to meet and work with people from various parishes. One of his goals is to expand the archdiocesan choir and bring more young people into it. The repertoire can be demanding, Clark said, but participation is flexible, with rehearsals dedicated to particular upcoming events.

At archdiocesan events, Clark tries to include music the congregation can sing, such as hymns, as well as traditional music appropriate to the occasion, such as chants. The music he uses in a single liturgy can span 1,400 years, with some written during the Renaissance and some written a week ago by Clark himself.

Clark noted that art and beauty are important "not as an end in itself but to bring our minds and hearts toward God." He believes the cathedral's music, renovations, and restoration of artwork are working toward the same end, "that people can come into a noble place that will elevate their hearts and minds to God."

"We owe God our best, as best as we can with the resources we have," he said.