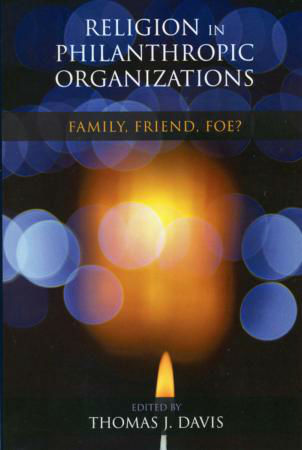 This is the cover of "Religion in Philanthropic Organizations: Family Friend, Foe?" edited by Thomas J. Davis. The book is reviewed by David Gibson. (CNS)

The work of religious philanthropic organizations came into clear view during the summer of 2014 when two Christian mission groups serving people in need around the world arranged to fly two of their medical missionaries suffering from the Ebola virus out of Liberia to a hospital in Atlanta, where they were treated successfully.

One group was Samaritan's Purse, a well-funded evangelical Christian organization dedicated both to "helping those in need and proclaiming the hope of the Gospel." The other group, officially called SIM, is an international Christian mission organization with similar goals. SIM stands for Serving in Mission.

Samaritan's Purse today is headed by Franklin Graham, son of famed evangelist the Rev. Billy Graham. The chapter in "Religion in Philanthropic Organizations" telling of the organization's earlier evolution under the evangelist Bob Pierce, who died in 1978, makes for compelling reading and casts light on precisely the issues the book highlights.

Over the course of his life, Pierce grew increasingly wary of the effects of accepting government funds in religious philanthropic organizations. He feared, too, that "professionalization" in the provision of social services would get elevated "over prayer" and compromise his organization's Christian mission and identity.

There is a close relationship between charitable action and philanthropy on the part of religious organizations, according to Thomas J. Davis, the book's editor. But the philanthropy his book focuses upon aims principally at alleviating society's ills and making the world a better place. This might be done through caring for the sick, feeding and educating the poor, disaster relief, counseling families that suffer or aid for immigrants.

How does a religious philanthropic organization "navigate the demands of governmental regulations when that organization is the recipient of federal dollars?" That important question, posed by Davis, is asked again and again in one form or another as the book's chapters unfold. Its 10 contributing writers explore issues of philanthropy from Christian, Jewish and Islamic perspectives.

Sheila S. Kennedy insists in a chapter titled "Religious Philanthropies and Government Social Programs" that "there is no constitutional reason that congregations cannot partner with government" in the U.S. "The issue is how such partnerships are conducted." Kennedy is professor of law and public policy at Indiana University-Purdue University Indianapolis.

Still, she advises religious congregations that their primary mission is ministry. "Before a congregation contracts to provide social services, it needs to consider whether the contract will divert attention and resources from that primary mission. A corollary question is whether contracting with government will mute the congregation's prophetic voice" -- mute its willingness to criticize government positions on specific issues, for example.

Issues related to government financial aid and the apprehensions of some that it will corrupt a religious body's mission represent one central area of concern in this book. It also calls attention to the divisions within individual religious bodies over the value and purpose of their social-services work.

These concerns may be particularly evident in contemporary times when the expectation looms large that social-services work will be conducted not only with good intentions, but professionally and competently.

How is a religious body's identity and purpose maintained in the conduct of social services work? Will those whose poverty is addressed by a church ever discover what the religious group believes or what convictions prompt it to serve others in need?

In other words, will actions truly speak louder than words in religiously sponsored social-services work? A fear that words of faith will not be heard much, if at all, has divided religious congregations over many decades, the book shows.

Within religious bodies, some resist social-services endeavors, considering them a distraction from the mission to call people to conversion. Others consider these endeavors basic to the practice of their faith.

One big challenge, then, when it comes to religion and philanthropy is to balance confidence in God with confidence in professionalism. Jesuit Father Fred Kammer, in an excellent chapter on Catholic Charities, appears to believe it is possible to achieve this balance. Father Kammer is a past president of Catholic Charities USA.

I found it notable that in discussing "the tensions of philanthropy and Catholic identity," Father Kammer took care to provide a list of "10 ways that Catholic Charities ministry is Catholic."

For example, he said, "Catholic Charities recognizes that some services require attention" not only to the physical and mental needs of those they serve, but to their spiritual needs as well.

Also, he said, "Catholic Charities promotes the sanctity of human life and the dignity of the human person," it "is authorized to exercise its ministry by the diocesan bishop," and its "ministry has been an integral part of the Catholic Church for 2,000 years."