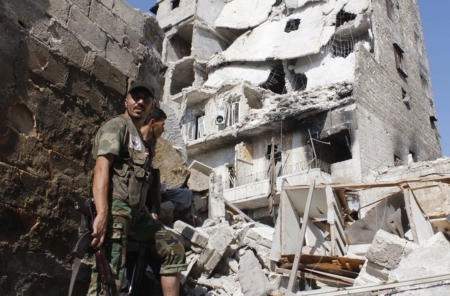 Free Syrian Army fighters stand in front of buildings damaged by what activists said was shelling by forces loyal to Syrian President Bashar Assad in the old city of Aleppo Sept. 2. During the Sept. 1 Angelus, Pope Francis announced he would lead a worldwide day of fasting and prayer for peace in Syria Sept. 7. CNS/Molhem Barakai, Reuters

BRAINTREE -- Heeding Pope Francis' call for Sept. 7 to be a "day of fasting and prayer for peace in Syria, the Middle East and throughout the world," Cardinal Seán P. O'Malley will lead a prayer vigil at St. John's Seminary and is asking all Catholics to join him in marking the special day.

The pope announced the day of prayer and fasting, which will come as U.S. lawmakers prepare to vote on proposed military action in Syria, before praying the noon Angelus with a crowd in St. Peter's Square Sept. 1.

"Humanity needs to see these gestures of peace and to hear words of hope and peace," the pope said.

He invited everyone "including our non-Catholic Christian brothers, followers of other religions and all men of good will, to participate, in whatever way they can, in this initiative."

President Barack Obama has called for military strikes to punish the government of Syrian President Bashar Assad, which the U.S. blames for an Aug. 21 chemical weapons attack near Damascus that reportedly killed more than 1,400 people, including children.

The pope said he condemned the use of chemical weapons "with utmost firmness," adding that "those terrible images from recent days are burned into my mind and heart."

"A judgment of God and also a judgment of history upon our actions are inescapable," he said.

But the pope insisted that "never has the use of violence brought peace in its wake. War begets war, violence begets violence."

Instead, Pope Francis called on all parties to "follow the path of encounter and negotiation and so overcome blind conflict."

The Holy Father will lead a vigil in St. Peter's Square Sept. 7 from 7 p.m. to 11 p.m. Rome time that will include a recital of the rosary, eucharistic adoration, scripture readings, a papal blessing and remarks by Pope Francis, according to Vatican spokesman Father Federico Lombardi.

The local vigil led by Cardinal O'Malley will be held simultaneously in St. John's Seminary Chapel beginning at 1 p.m. and concluding with a Mass celebrated by the cardinal at 5 p.m. Directions to St. John's Seminary and parking information are available at the seminary's website, www.SJS.edu.

"It's important to the cardinal, because it's important to our Holy Father. The cardinal's decision to extend the invitation for people to participate in the prayer vigil comes from the fact that he wants personally to be in solidarity with the Holy Father, but he also wants to give those people who are able to come to the seminary on Saturday the opportunity also to be in solidarity, and in prayer," said Father Jonathan Gaspar, director of the archdiocese's Office for Worship and priest secretary to the cardinal.

"But more important than the prayer vigil at the seminary is the fact the cardinal is inviting all Catholics in the archdiocese to really join in this day of prayer and fasting on Saturday. Whether or not we can come to the seminary for the prayer vigil, it's important for everyone to know that we are all being invited by the Holy Father to pray for peace in Syria and in the Middle East and to fast," he said.

On fast days, Catholics between ages 18-59 are expected to eat only one main meal and two smaller meals.

"When we fast, we are intensifying our prayer," Father Gaspar said.

The cardinal also asked all priests who regularly celebrate a Saturday daily Mass in their parishes to use the Mass texts for prayer "In Time of War or Civil Disturbance." He suggested that if a Mass is not normally celebrated in the parish on Saturday mornings, pastors consider adding a Saturday morning Mass for Pope Francis' intention.

"The road to peace isn't just about saying no to war, although that is what we're praying for this weekend, but it is also about putting into action in our own lives and in our culture that recipe for peace that Mother Teresa speaks about, and prayed for in her life," Father Gaspar said referring to the famous saying of Mother Teresa: "The fruit of silence is prayer; the fruit of prayer is faith; the fruit of faith is love; the fruit of love is service; the fruit of service is peace."

Reports by Francis X. Rocca of Catholic News Service contributed to this story.