As Dallas charter turns 20, abuse has become issue for much of society

WASHINGTON (CNS) -- Twenty years ago, in 2002, the revelations of clergy sexual abuse and its cover-up in the Archdiocese of Boston was the metaphorical bombshell that fell on the Catholic Church in the United States.

The U.S. bishops, when they met that June in Dallas, approved the "Charter for the Protection of Children and Young People," a comprehensive set of procedures for addressing allegations of sexual abuse of minors by Catholic clergy.


Its one-strike-and-you're-out policy did just that -- permanently removing from public ministry those priests against whom abuse allegations were substantiated.

Twenty years later, at their assembly in Baltimore Nov. 14-17, the bishops acknowledged the charter's anniversary and said that they have made steps in addressing clergy sexual abuse and would continue to listen, care for and walk with survivors.

Over the past 20 years, the fallout from the Boston revelations has touched nearly every diocese. Dozens of dioceses have filed for bankruptcy protection to reach a group settlement on claims filed by abuse survivors. Many of those dioceses, though, have now emerged from bankruptcy.

High-profile clergy also have been accused of abuse. The latest was Father Michael Pfleger, a firebrand priest who is outspoken about gun violence, gangs, poverty and racism. He serves the Faith Community of St. Sabina in Chicago, a historically African American parish.

But the 73-year-old priest in an Oct. 15 letter to parishioners said: "Let me be clear -- I am completely innocent of this accusation."

It is the second time the Chicago Archdiocese has asked him to step aside from ministry over an abuse claim. In January 2021, he was accused of abuse that allegedly occurred 40 years ago. He was restored to ministry after the accusation was determined to be not credible.

In November, retired Bishop Howard J. Hubbard of Albany, New York, announced he has asked the Vatican that he be "returned to the lay state." He has long been criticized for his handling of abuse cases in the diocese. And because he himself has been accused of abuse, he said, he is forbidden to function as a priest -- a policy he noted he backs.

The 84-year-old bishop stated Nov. 18 that he had made the request because of his age and the fact he is retired from active ministry. He also repeated his denial that he abused anyone.

The problem of sexual abuse of children, young people and vulnerable adults is not of course just the sole province of the Catholic Church.

The Boy Scouts of America had to declare bankruptcy in 2020 after accusations of abuse roiled the organization.

Abuse has seeped into sports, in particular gymnastics. Former physician Larry Nassar is expected to spend the rest of his life in prison following his conviction five years ago on multiple charges of abuse of young gymnasts. This year, youth hockey was in the headlines about abuse cases.

High-ranking churchmen in other parts of the world have either had to face accusations of abuse or have admitted to abusive acts. In August of this year, the Southern Baptist Convention acknowledged a federal investigation had begun into how it treated abuse accusations. And this just scratches the surface.

In an interview earlier this year with Catholic News Service, Cardinal Wilton D. Gregory of Washington recalled when he was president of the U.S. bishops' conference in 2002, when the Boston scandal broke, and his first of 13 visits to the Vatican regarding the charter.

"I was told that this was an American problem. And then it was suggested that it was an English-speaking problem," he said.

"Well, now it doesn't just speak English. It speaks Polish, it speaks German, it speaks Spanish," he said, referring to abuse crises that have emerged in other countries. "The world has come to a much clearer awareness that this is an issue that has touched the church globally. Praise be God, Pope Francis has taken a much more direct, active and, I hope, effective response to these issues."

In 2019, Pope Francis issued the "motu proprio" "Vos Estis Lux Mundi" ("You are the light of the world"), which revises and clarifies norms and procedures for holding bishops and religious superiors accountable for protecting abusers worldwide.

At a June meeting that year, the U.S. bishops passed three new bishop accountability reforms, and they establish a third-party reporting system for allegations of violations by bishops.

The abuse crisis has few, if any winners. A survivor may feel cheered at having his or her story acknowledged and believed, but it hardly wipes away the original abuse.

"We have suffered serious loss of credibility" as bishops, Cardinal Gregory said in a second CNS interview. "We have many wonderfully generous honest open, transparent and believable bishops. But it only takes one or two to undermine all of the hard work they have done."

"I think one thing that was really great this past year was the information that came forward from all these governmental reports" such as Germany, France and England, said Zach Hiner, executive director of the Survivors Network of Those Abused by Priests.

"I think it's a good sign that governments across the world that stopping sexual abuse is something they have to be involved in, and not shunting off the burdens to the institution," he told CNS, adding his hopes the United States will conduct an investigation.

But Hiner said he considered as "one particular black mark" on church response to abuse the election in November of Archbishop Timothy P. Broglio of the Archdiocese for the Military Services as president of the U.S. Conference of Catholic Bishops.

According to SNAP, Archbishop Broglio leads one of the three archdioceses that haven't published a list of clergy and other church workers credibly accused of abuse.

Hiner called that "unconscionable" and feels "the USCCB sent a message that they don't really care about that (releasing lists of those credibly accused) anymore, and I find that problematic."

The military archdiocese, like all U.S. dioceses, has in place a policy to address allegations of sexual abuse of a minor. In past statements Archbishop Broglio has expressed his shame "for the mistakes that we, the bishops of the U.S. have made in the past" in addressing abuse.

Despite SNAP's reputation as a confrontational organization, "church officials want to work with SNAP," but most survivors come to SNAP because it is independent, Hiner said. "Most of our members want that arm's length relationship."

"The church will always have to be dealing with issues of abuse in general. The charter from 20 years ago opened a door for folks to be able to address and bring up their memories," said Deacon Bernie Nojadera, now in his 12th year as executive director of the bishops' Secretariat for Child and Youth Protection.

Regarding the strain on diocesan operations and budgets due to abuse payouts, Deacon Nojadera said: "I've had bishops report to me, tell me that because of the economy, because of monetary shortcomings, bankruptcy, they tell me they've had to shut down ministries."

"But they tell me their ministry for protection is going to be the last ministry to be shut down," he added.

Deacon Nojadera said he is "eternally grateful for the survivor-victims telling their story and making their reports. That's the saving grace. They brought to the light what was in the dark. And thank God for the Boston Globe and that movie 'Spotlight' and any other opportunity for survivors to feel strengthened."

The deacon said, "It's bad the abuse took place. I have every sorrow and apology; that hurts to the core. ... to have to hold that in silence out of fear or perhaps thinking they may be the only one."

Today, he added, "every diocese in the United States has a victims assistance office and safe environment coordinator, and a consistent, reliable relationship with law enforcement and elected officials."

And that, Deacon Nojadera said, is because of "that reality that abuse happens. Abuse is in society, and what the church is doing is providing an example to other segments of the society." 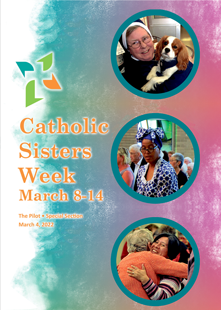