The Catholic Church in the United States is nothing if not loaded with history. Three new books provide marvelous and weighty resources for any who would travel by car, bus, rail or air in pursuit of historical insights into Catholic history, much of which you may not have known even happened.

Literal travel is not required, however, as these books provide a wonder of information for even the most amateur of armchair travelers.

Marion Amberg's "Mary's Miracles" leads you to more than 50 Marian shrines, chapels and statues, all located in the good ol' U.S. of A. Amberg organized her information into geographical locations: Northeast, Mid-Atlantic, Southeast, Midwest, Mountain West, Southwest and Pacific West, with the material subdivided into the states in each of these regions.

Practical guidance comes with a full-color, easily readable map of each geographical region.

Following an introduction, in a couple of pages titled "How to Use This Book," the author explains that "you can use this book in several ways, as a road guide to Our Lady's miracle sites across Catholic America, as an armchair traveler in a 'stay-pilgrimage' or as a spiritual sojourner wanting to learn more about Our Lady's fabulous intercession."

Also, Amberg explains, the reader can use the book's subjects in a devotional style, one a week for a year. "Each week, pick a site and learn more about Mary and her titles."

Beautifully illustrated with full-color photos, each of the book's Marian topics concludes with contact information for that particular site or shrine.

"Mary's Miracles" is a remarkable resource, a book loaded with clearly written information about Mary and miraculous ways she has manifested herself in the United States in the course of more than 200 years.

Historian Kevin Schmiesing's "A Catholic Pilgrimage through American History" takes a wide perspective and is designed to give the reader many insights into Catholic individuals and events that have had a profound impact on American history. In 27 chapters, the author draws the reader's attention to one pilgrimage site after another that he or she is likely never to have known about before.

A few examples: the Moon Room at Toledo, Ohio's Central Catholic High School; the Heritage Center on the Pine Ridge Indian Reservation in South Dakota; the murder of an archbishop in 19th-century Alaska; how the University of Notre Dame began as an Indian mission; and the story of how Major League Baseball's San Diego Padres came to be named for Franciscan missionaries.

Schmiesing, who lectures on church history at Mount St. Mary's Seminary and School of Theology in Cincinnati, writes with a lively, informative and entertaining style. Time after time, Schmiesing grabs the reader's attention with stories and anecdotes the reader is unlikely ever to have heard before.

One example: how Ursuline nuns held a prayer vigil for an American victory at the Battle of New Orleans in 1814 and how, later, former Gen. Andrew Jackson became president and returned to New Orleans to thank the nuns for their prayers.

Christopher Shannon's "American Pilgrimage" is a unique and hefty volume filled with true story after true story about Catholic influences on significant events and personages in American history.

Shannon, a professor of history at Christendom College in Front Royal, Virginia, presents the story of the Catholic Church in the United States, from the colonial period through the 20th century.

Readers may be surprised to read that "the Catholic life that eventually developed in the New World has its roots in the events of 1531, with the appearance of Our Lady of Guadalupe to the indigenous Catholic convert Juan Diego."

Following an introduction, Shannon divides his book into three major parts titled "Seeds," "Fruits" and "Seasons," with a conclusion titled "Easter." The first section covers American Catholicism's origins in Spain, France and England. The second part discusses the growth of institutional Catholicism in the U.S. Finally, the third section reports on significant Catholic events and persons during the modern era.

Shannon's book is a fine one to read for both information and inspiration; any Catholic wanting to become better informed about the history of the church in the United States would do well to read this solid volume.

Finley is the author of more than 30 books on popular Catholic theology, including "The Rosary Handbook" and "Key Moments in Church History." 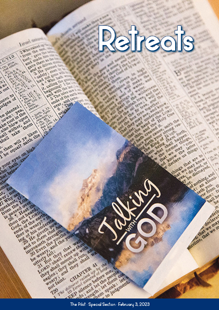