Douglas M. Beaumont is a former evangelical who joined the Catholic Church several years ago. A former professor in an evangelical Christian seminary, he has published a Catholic update and "reboot" of his 2009 book, "The Message Behind the Movie."

In an age when Christians can access online websites that reveal the number of times profanity is used in a film, how many sexual scenes and sexual references there are and how many drug references, Beaumont provides a biblical framework in which a religious believer can evaluate a film, absorb the positive elements and use various aspects of the film in communicating the Gospel.

His ability to provide a balanced, well-thought-out view on the Scriptures and a positive point of view on a Christianity's ability to be "in the world" but not "of the world" is quite refreshing and encouraging.

The author loves movies and sees the value of the art form, the significance movies have in forming the values of our culture and the practical opportunities they bring to find common ground with others in order to bring the truth of the Gospel and conversations on faith.

The author makes it clear that increasing our pleasure in movie watching is not the primary goal, but rather to learn how to evaluate a movie in light of Christian beliefs. Analogous to great music or art that communicated an aspect of God's sovereignty or Christ's compassion for past generations, movies can do likewise.

This involves discerning the message of the movie revealed by its story, the structure and the assumed worldview of that story. Beaumont would argue that "only then can Christians evaluate whether the movie presents a strong Christian, non-Christian or anti-Christian worldview, which they can then respond to and use as a starting point for apologetics and evangelism."

By discussing the cinematic techniques and the genre considerations filmmakers use to communicate their ideas, this book helps Catholics and other Christians to become informed viewers. The book shows how to evaluate the stories that movies tell and how to discern what they say about reality, God and what it means to be human.

At the same time, he illustrates how movie watchers can engage in thoughtful, lively discussions not only about film but also about the big questions in life.

The author begins by setting forth the historical context by which we knowingly or unknowingly evaluate entertainment. The two positions find their origins in Plato and Aristotle. Plato held that art is basically useless and may even be harmful.

Beaumont sides with Aristotle and writes approvingly: "An Aristotelian approach to movies needn't condone sinfulness; instead, it can recognize how central storytelling is to human experience and seek to accurately critique the messages that stories in films are communicating."

In Act Two, on evaluating and discussing movies, Beaumont encourages Christians to discern good and bad in movies. He prompts Christians to use movies as a starting point in sharing the Gospel message and to discern the philosophical angle that may "open doors to conversations which may clarify the faith." In Jesus' parables, the listeners are obliged to do the same.

In Act Three, on applauding and avoiding movies, the author not only has his eye on culture; he also rejects the sympathetic attitude that some Christians have toward postmodernity and positions himself in a school of thought that is focused on classical apologetics.

The book has excellent insights into the production of a movie and ends with a commentary on the film, "The Truman Show." Parents should certainly have discretion over what is allowed in their households and the rating designation of a movie can be informative for age-appropriate viewing.

The reader will gain appreciation for the messages that are found within movies, which can be a starting point for dialogue with people of divergent faith backgrounds or no faith at all.

Wright is executive director of the New Jersey Family Policy Center in Trenton. 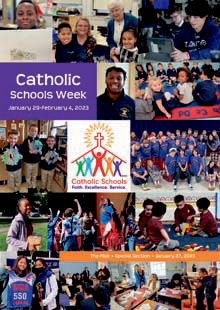