Father Raymond Van De Moortell grew up in Holy Family Parish, a Jesuit parish in his birthplace of San Jose. Many of the Jesuits who ran the parish were Italians who had been missionaries in China until they were expelled by the Communists.

Father Van De Moortell joined the Society of Jesus in the hope of also becoming a missionary. He was ordained a priest in 1976 at St. Ignatius Church in San Francisco by Bishop Robert L. Whelan, SJ, of Fairbanks, Alaska. He went through his scholastic training, teaching, and doctoral work at Stanford University.

He wanted to study biblical languages and theology, but instead, he was sent to study the sociology of knowledge. He did his postdoctoral fellowship at Woodstock Institute in Washington, D.C. He eventually became a librarian, and the practice of curating old books brought him to Boston.

He had been a Jesuit priest for 30 years before he felt drawn to the diocesan priesthood. He served at St. John the Evangelist Parish in Winthrop for four years as a priest-candidate for incardination. After a brief return to California to care for his dying father, he was incardinated for the Archdiocese of Boston in 2007.

He served as librarian at St. John Seminary from 2008 to 2021, and also taught courses in philosophy and Latin. From 2020 to 2022, he was parochial vicar of both St. Adelaide and St. Ann Parish in Peabody. He was granted senior priest status in 2022. 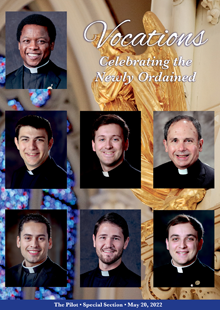