The Hub native was born May 10, 1947, and attended local schools, graduating from Boston English High School in the Class of 1965. He was one of the six children of the late Anthony and Dorothy (Slamin) Medairos to be raised in Dorchester's Columbia Point section. His siblings include Lee Hendrigan, Michael, Gary, David, and Paul.

He attended archdiocesan seminaries Cardinal O'Connell in Jamaica Plain and then St. John, Brighton. Archbishop Humberto Medeiros ordained him a deacon at Immaculate Conception Church, Weymouth, on May 6, 1972, four days shy of his 25th birthday. Just a year later and nine days following his 26th birthday, Humberto Cardinal Medeiros ordained him and his classmates at Holy Cross Cathedral.

Save for a few years of active duty service as a chaplain to the United States Army (1991-1996, and 2003-2004), Father Medairos has served in parish assignments in the archdiocese.

Except for his assignment as parochial vicar at Gate of Heaven, South Boston (1993-1997), all of his other assignments have been to parishes south of Boston.

In November 1999, Cardinal Bernard Law appointed him as pastor of Our Lady of Lourdes Parish in Carver. This assignment would be the longest one of Father Medairos's priestly life. Although the parish was small compared, for instance, to either Gate of Heaven or Immaculate, Stoughton, he spent time building up the parish community and increasing attendance not only at parish activities but more importantly at Sunday Masses.

With the creation of a new category of priest -- senior vicar -- Father Medairos was, in 2018, not quite ready for senior priest status but also was feeling the need to slow down but still be available for parish ministry.

Senior vicars are priests who have passed the age of 70 but want to remain in parish ministry on a less than full-time basis. A priest and a pastor make binding arrangements for schedules, compensation, and the like. And then the priest serves until he seeks and is granted senior priest status.

Father Medairos made such a senior vicar arrangement and it was approved by Cardinal O'Malley, who made the assignment. In this case, Father Medairos was senior vicar at St. Catherine of Siena Parish in Norwood. He has been there for about four years. These have been challenging years for the entire Church and no less so in Norwood.

In a parting message to parishioners there, he noted that he had very much come to appreciate the parish, its staff, the priests who have assisted there, and the seminarians and transitional deacons who were being shaped on their journey towards ordination at the busy parish.

With his goodbye to Norwood, he indicated that he would retire to an "Undisclosed Location," or as we prefer here at The Pilot, living in his own private residence. 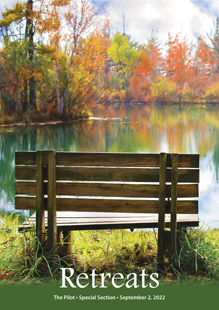