After his high school graduation, he enrolled at the now-defunct Boston State College for his undergraduate studies, after which he worked for nine years as a social worker at the Welfare Department in the cities of Quincy, Brockton, and Norwood. It would be while working for this department that he returned to school to get a master's degree, this time at the Jesuit-led Boston College in Chestnut Hill.

While Father Mawn saw social work as a helping profession, he felt that becoming a priest would allow him to help people even more, so he set out to Pope St. John XXIII National Seminary in Weston to prepare himself for the priesthood. Cardinal Humberto Medeiros ordained him and his classmates on June 5, 1982, at the Cathedral of the Holy Cross. He had served his deacon year at St. Patrick, Brockton. He celebrated his first Mass on June 6 at St. Agatha Church, Milton.

The years 1982 through 1988 found him in his first assignment at St. Mary Parish, Lynn, serving as an associate. Seeing there was a need for missionary priests, Father Mawn joined the Missionary Society of St. James the Apostle and, between 1988 and 1993, served primarily in Colimes, Ecuador, in the Archdiocese of Guayaquil. His time in Ecuador not only aided him to develop a facility with the Spanish language but also introduced him to a vibrant, faith-filled community whose members lacked material possessions but were genuinely content.

On his return to the archdiocese, he was appointed to Team Ministry at St. Rose of Lima Parish in Chelsea in 1994, remaining there for almost four years. Eventually, Cardinal Bernard Law announced the appointment of Father Mawn to serve as the pastor of St. James Parish in Haverhill, effective Feb. 2, 1998.

Remaining a steady presence in Haverhill for almost nine years, Father Mawn's next assignment took him to nearby Lawrence in 2007, where he would serve his lengthiest assignment yet -- of more than 14 years -- as the pastor of Corpus Christi Parish. During his time there, he made good use of his Spanish language skills as he celebrated services in both English and Spanish.

In February 2021, the Corpus Christi Parish rectory, where Father Mawn was the sole resident, was caught on fire, destroying the second and third floors of the rectory building. Fortunately, Father Mawn was able to escape unharmed, and the rapid response of the Lawrence Fire Department prevented the fire from reaching the attached church building.

Even though Father Mawn had lost his residence and possessions in the fire, which led him to find accommodations in the nearby St. Mary of the Assumption Parish, he was resolute in his decision to continue evangelizing the community of Lawrence, transforming the parish center into a temporary worship space as the upper church had suffered smoke damage.

It would be that same year -- in November, more precisely -- when he was named senior priest.

Father Mawn, who has maintained his residence at St. Mary of the Assumption Parish, celebrated his 40th anniversary of ordination into the priesthood on June 4, 2022. 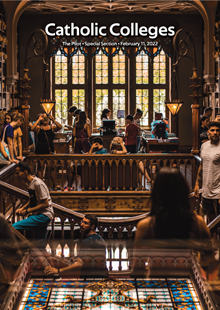