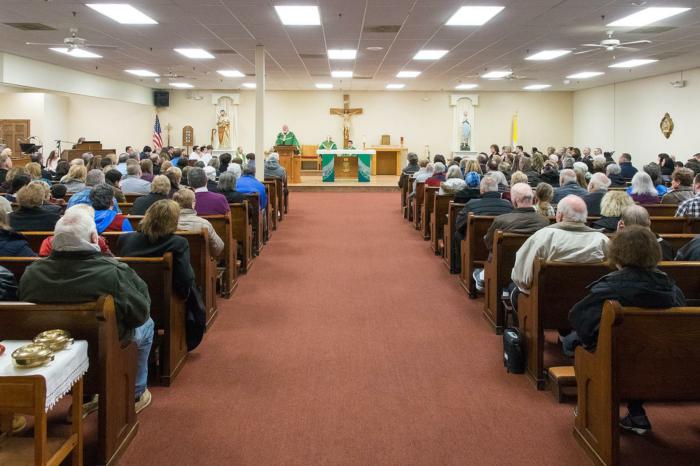 Our Lady of Lourdes is part of a collaborative with St. Peter Parish and St. Kateri Tekakwitha Parish in Plymouth. When Father Joseph Raeke was assigned to the collaborative in June 2018, it did not take long for him to decide they needed to renovate the worship space, which was located in a former drugstore.

In a phone interview with the Pilot Feb. 8, Father Raeke explained that 30 years ago the pastor of Our Lady of Lourdes sold the small wooden church because it needed repair and the parish had outgrown it. The parish then bought a property that had been a strip mall. They held Mass in a building that used to be a drugstore, using folding chairs instead of pews -- with the hope of someday moving into one of the larger buildings, a former supermarket. Father Raeke thought it better to let go of that idea and beautify the space currently used for worship with the goal of completing renovations by Christmas.

The renovations took more than three months to complete and included newly painted walls, new carpeting, a new sacristy, and a reconciliation room.

Several features new to the space were inherited from the original church and other communities. The parish obtained pews from Our Lady of Victories Church in Boston, which closed in 2016. In the rectory basement, they found interior doors from St. Peter Church, which they stripped, sanded, stained, and installed in Our Lady of Lourdes. The crucifix and Stations of the Cross are from the original church, which were kept in storage for 30 years. The ambo, tabernacle, and small altar are from Regina Cleri Residence.

Though the parish hired people to perform some jobs, such as tiling the entryway, many parishioners volunteered their time to pitch in personally. After coming home from work, Father Raeke said, they would stay up at night doing whatever tasks needed to be done.

"The people are very proud of their church and so happy to have given of their time and their talents to make it a beautiful place," Father Raeke said.

He reported that more people attend the church now than when he first arrived.

"Some people would come in; they'd stand in the entrance and look, and start crying. They were overwhelmed, realizing that they now had this beautiful church. It was a beautiful labor of love," Father Raeke said.

He added, "I'm overjoyed and so pleased with what has happened in a very short period of time. I'm so grateful that I'm the pastor of these three churches" and "that God placed me in this situation and then used me and all of these folks to do something tremendous.

When the cardinal visited on Feb. 3, about 300 people attended the Mass. Parishioners from St. Peter and St. Kateri Tekakwitha came to see the renovations and support their fellow collaborative members.

"This whole effort has really brought the three parishes closer together," Father Raeke told the Pilot.

Father Raeke reportedly said at the Mass, "I've never quite experienced the faith so alive in people as I have in my time here at Our Lady of Lourdes."