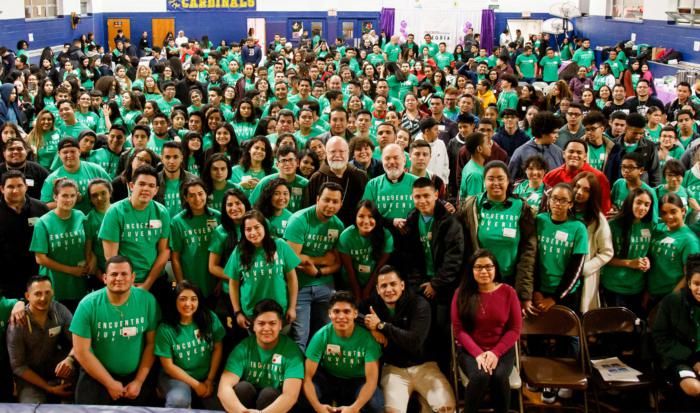 Cardinal O'Malley poses with participants at the Hispanic youth in the gymnasium of the Cheverus School, the parish school of Sacred Hearts Parish in Malden. Pilot photo/Jacqueline Tetrault

"We wanted to gather the youth, because one of the things that was talked about at the National Encuentro was, we need to do something more for youth and young adults. And this is an event that we started last year, trying to bring more attention to the Hispanic community since they make the great majority of our Catholic population here in Boston," Natalia Pellicano, Director of Ethnic Faith Formation and Missionary Discipleship, told The Pilot.

Jorge Rivera and his band from the Archdiocese of Chicago provided music at the start of the event and during transitions between activities.

"The band was wonderful, they truly helped all of us to praise and worship better throughout the event," Sister Elsa Narvaez-Rodriguez, MSP, the archdiocese's Evangelization Consultant for Hispanic Communities, said in a statement to The Pilot.

Following the format of the National Encuentro, the Encuentro Juvenil started with everyone together, then split into groups according to age and language. Rivera, who has worked in the Archdiocese of Chicago's Hispanic ministry for many years, led the young adult group. Father Alejandro Cardinale Lopez,administrator at St. Benedict Parish in Somerville, moderated youth in Spanish, while Wendy Mejia, a member of Sacred Hearts Parish, moderated youth in English.

Mejia told the youth in the English language breakout session that they have a responsibility to pass on their faith.

"Where the world cannot see Christ, they must see you. You are the representatives of peace, hope, mercy, love, compassion," she told them.

Facilitators gave out forms for the attendees to fill out, ranking their levels of interest and capability in proclaiming Jesus.

"This youth conference is for you to help the Church, to let us know what we need to do to support your faith," Mejia said.

On the back of the papers, each person wrote down a question for Cardinal O'Malley. They then shared their questions in small groups, and each group selected one representative to present a question to the Cardinal.

After the groups reconvened, Cardinal O'Malley spent an hour answering questions from several people in each age group. The questions touched on a wide variety of social, theological, moral and political topics, such as "How do I get an atheist friend to come to church without it being disrespectful?", "Where does the Catholic Church stand on gun control?", and "Have you ever doubted God's existence or his ability to help a situation? How can we help people who feel this way?"

The time of dialogue was followed by a pizza dinner, music, and Eucharistic Adoration.

Sister Elsa said she was pleased with way the event turned out.

"It was wonderful to see the youth so engaged during the breakout sessions and the wonderful questions they ask the cardinal. The cardinal's responses were wonderful to all that the youth asked about faith and the life of the Church. We have great hope for the future of our youth andthis event was also a good wayfor us to understand better the needs of each age group within Hispanic ministries in Bostonand to brainstorm ways in which we can help them come even closer to Christ," Sister Elsa said.