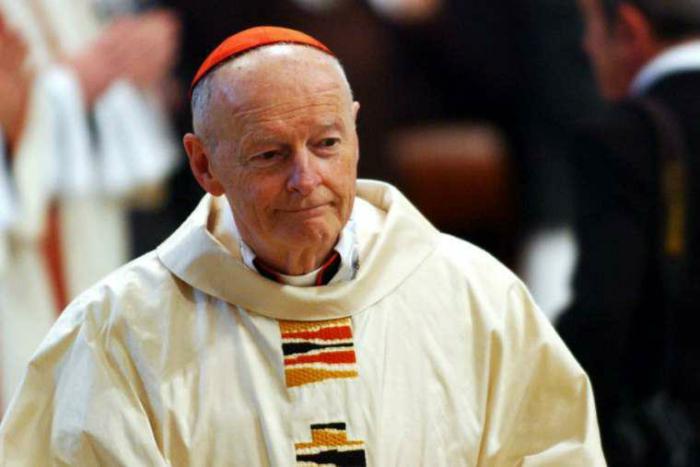 Denver, Colo., Feb 12, 2019 CNA.- Archbishop Theodore McCarrick will reportedly be laicized this week, if he is found guilty of having sexually abused minors.

But what does it mean to be “laicized,” “defrocked,” or “dismissed from the clerical state?”

Ordination, the Catechism of the Catholic Church teaches, “confers a gift of the Holy Spirit that permits the exercise of a ‘sacred power’ which can come only from Christ himself through his Church.”

The Church says ordination marks a person with an irremovable imprint, a character, which “configures them to Christ.” Ordination, in Catholic theology, makes a permanent change that the Church has no power to reverse.

“You are a priest forever,” the Letter to the Hebrews says.

This change is referred to as an ontological change, or a change in being itself.

In addition to making an ontological change, ordination also makes a legal change in a person’s status in the Church. By ordination, a person becomes in canon law a “cleric.” The word “cleric” is derived from the Greek word for “casting lots,” a process of selection similar to drawing straws or rolling dice, because in Acts 1:26, Matthias is added to the 11 remaining apostles after lots are drawn to select the right person.

A cleric, or a sacred minister in the Church, is an ordained man who is permitted by the Church to exercise sacred ministry. A cleric is bound to certain obligations, among them is usually celibacy in the Latin Catholic Church, and he possesses certain rights, among them is the right to be appointed to pastoral leadership positions in the Church. Clerics have the right to be financially supported by the Church, and are bound by obedience to the pope and to local Church authorities.

While ordination can never be lost - no power on earth can erase the sacramental imprint of ordination - a person can lose the legal status of being a cleric- this is what is referred to as “laicization.”

When a person loses the clerical state, he no longer has the right to exercise sacred ministry in the Church, except the extreme situation of encountering someone who is in immediate danger of death.

Someone who has lost the clerical state also no longer has the canonical right to be financially supported by the Church.

Often, a man who is laicized is also dispensed from the obligation of celibacy, and permitted to marry - but this is not always the case, especially when someone has been involuntarily removed from the clerical state.

Ordinarily, the Church does not permit a person who has been dismissed from the clerical state to teach, as a layman, in a Catholic college or school, to be a lector or extraordinary ministry of Holy Communion, or to exercise other functions in the name of the Church. This is determined on an individual basis, and exceptions and dispensations can be made.

A person can lose the clerical state because he has requested it through a special petition to the pope personally, or he can lose it as a penalty for committing an ecclesiastical crime, as is likely to be the case for McCarrick. There are even provisions which allow for a priest or deacon who has abandoned his ministry to be removed from the clerical state after a protracted period of time, and through a specified canonical process.

Losing the clerical state as a penalty comes after a person has committed some crime. But it is not the case that everyone who has been laicized has done something wrong- the Church does not suggest that it is immoral for a priest or deacon to request laicization, and there are many legitimate reasons a priest might do so, though these are often deeply personal.

A laicized priest is no longer referred to as “Father,” or by any other honorary title given to clerics.

If McCarrick is laicized, the Church will no longer have responsibility to provide him with housing, medical care, or any other financial benefits. He will not be permitted to celebrate Mass or any other sacraments, except in situations he is unlikely to encounter, such as being with a person in danger of death.

If he is laicized, it is not yet known whether McCarrick will leave the Kansas friary where has been living a life of prayer and penance. Though he is reported to have some financial means at his disposal, and is likely entitled civilly to a Church pension, it is not yet known what options are available to him.