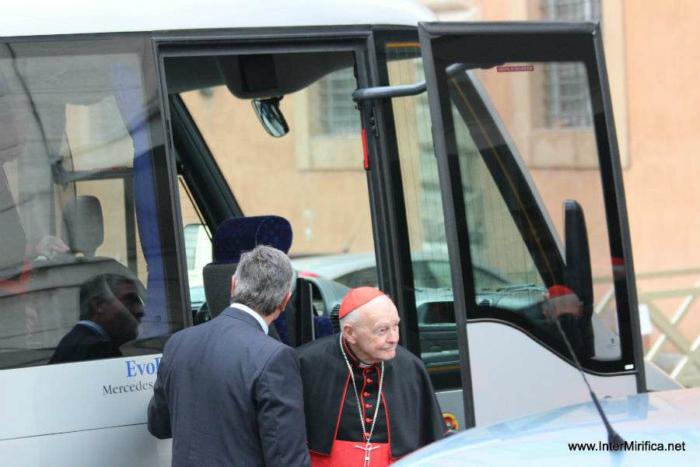 As U.S. bishops meet, Vatican may be deciding fate of former cardinal

Vatican City, Jan 7, 2019 CNA.- While recent media reports suggest that a trial of Archbishop Theodore McCarrick is underway, Vatican sources have told CNA that his case is not being handled by a full judicial process.

Sources at the Congregation for the Doctrine of the Faith have confirmed that allegations against McCarrick are being considered through an abbreviated approach called an “administrative penal process.”

That decision gives insight into the strength of evidence against McCarrick, and suggests that resolving sexual abuse allegations against the archbishop is a top priority for Pope Francis and other senior Vatican officials.

Canon law outlines specific processes for handling allegations of sexual abuse by clerics. All of these are reserved to the Congregation for the Doctrine of the Faith in Rome. When the charges involve a bishop, the CDF requires specially delegated authority from the pope to handle the case.

A full canonical trial is a lengthy affair. Depositions of witnesses and alleged victims are taken by the court at which a prosecutor, called the “promoter of justice” in canon law, and lawyers for the defense are present. Written argumentation is exchanged through a panel of judges, with precise timelines, manners of proceeding, and legal minutiae that must be observed at each step of the way, in order to ensure that the rights of the accused are protected.

In previous sexual abuse cases against bishops, full and formal trials have taken years, and include the possibility of appeals by both the prosecution and defense. But this is not happening with McCarrick.

Under certain circumstances canon law allows for a legal investigation and determination to be conducted by an administrative penal process. This is a much-abbreviated mechanism that leaves out many of the procedural stages of a full judicial process or trial, including the back-and-forth argumentation between prosecution and defense.

An administrative process is only used when the evidence collected during the preliminary investigation is so clear as to make a full trial unnecessary.

In McCarrick’s case, the use of an administrative process strongly suggests that the Vatican has clear evidence the archbishop has committed a delict, an ecclesiastical crime, especially because his position as an archbishop and former cardinal guarantee considerable scrutiny of the result.

The use of the abbreviated process for McCarrick also indicates a significant change in the CDF’s assessment of the evidence and allegations he faces.

The first public accusation against McCarrick, announced by the Archdiocese of New York in June, concerned abuse against an altar boy who was, at the time of the alleged abuse, 16 years old.

While that allegation was enough to trigger a number of subsequent disclosures about McCarrick’s alleged behavior over a period of years, and prompted his departure from the college of cardinals, sources close to the CDF told CNA that a trial over that allegation was, by itself, unlikely to result in McCarrick’s laicization.

In addition to the relative paucity of evidence, sources also noted that at the time of the alleged abuse in the early 1970s, canon law did not consider someone over 16 years old to be a minor, which means that a trial might have concerned delicts more difficult to prosecute than child abuse.

But in the course of the CDF’s investigation, evidence has been received from a number of other alleged victims of McCarrick.

Key among McCarrick’s accusers is James Grein, who gave evidence before specially deputized archdiocesan officials in New York on Dec. 27.

As part of the CDF’s investigation, Grein testified that McCarrick, a family friend, sexually abused him over a period of years, beginning when he was 11 years old. He also alleged that McCarrick carried out some of the abuse during the sacrament of confession - itself a separate canonical crime that can lead to the penalty of laicization.

The CDF has also reportedly received evidence from an additional alleged victim of McCarrick - 13 at the time of the alleged abuse began - and from as many as 8 seminarian-victims in the New Jersey dioceses of Newark and Metuchen, in which McCarrick served as bishop.

Because of the collection of that evidence, McCarrick now faces multiple canonical charges of sexual misconduct and abuse concerning both minors and adults, including solicitation in the confessional. Use of the abbreviated administrative process, which is only employed in cases of compelling evidence, indicates that McCarrick is likely to be convicted on at least some of the charges.

According to CDF sources, the investigative phase of the process has now been formally concluded and McCarrick has been given the chance both to speak in his own defense. His canon lawyer may also submit arguments on his behalf.

The CDF is expected to formally assess the evidence and defense within the next week, and to reach a final determination.

While many Catholics, including some bishops, have expressed frustration at a lack of resolution to the McCarrick case, his process is proceeding at break-neck pace, at least by canonical standards.

Nevertheless, the CDF has been under pressure from the pope, together with several senior American cardinals, to resolve the matter before the heads of the world’s bishops’ conferences gather in Rome next month for a crisis summit on the recent sexual abuse scandals.

Some announcement of a decision is highly likely ahead of that meeting.

McCarrick is likely to be laicized if he is found guilty.

The Church has refrained from dismissing clerics who are either too old, infirm, and without other means of support, recognizing a moral obligation by the Church to see to their basic subsistence.

But while he McCarrick is old and in failing health, he is also known to be financially independent. As one source in Rome told CNA “The CDF don’t usually laicize someone if it means they’ll be living on the street, but McCarrick has always had money to throw around.”

It also seems likely that as a technical matter, it will be Pope Francis, not the CDF, that declares a verdict and imposes a penalty on the archbishop.

The CDF’s legal procedures for an administrative process include the option to “present the most grave cases to the decision of the Roman Pontiff,” especially when they include dismissal from the clerical state. The pope has stated that he prefers to make the final decision on cases involving bishops, and the CDF is likely to acquiesce to the preference.

Among the reasons Pope Francis might decide McCarrick’s case personally is expediency. If the CDF imposes a penalty on McCarrick, the archbishop will be free to appeal the matter to the pope, and that could delay announcement of a resolution to sometime after the February summit.

On the other hand, if CDF chooses to make a recommendation to Francis that he personally declare the guilty verdict and the penalty of laicization, and if the pope does so, it would be formally impossible for the decision to be appealed.

Since the announcement of the first formal accusation against him in June, McCarrick has become for many the public face of the sexual abuse crisis. His fall from grace has damaged the credibility of many senior members of the Church’s hierarchy, both in the United States and in Rome, and has touched the legacies of three successive popes.

Removing McCarrick from the newscycle - and possibly the clerical state - has been a major priority for both the pope and the American hierarchy.

If his case is resolved before the February summit, it could be seen a much-needed demonstration by Pope Francis that he is serious about punishing offending bishops.

But even if resolved, the McCarrick case will pose serious questions for the bishops to consider next month in Rome.

The long list of charges he faces includes many seminarians and other adults. While he may be convicted and laicized on the strength of the evidence he abused minors, his other victims will also look for justice.

Prominent voices like Cardinal Sean O’Malley and Marie Collins, the abuse survivor and former member of the Pontifical Commission for the Protection of Minors, have called for a change in the CDF’s legal definition of “vulnerable adults,” who are classed alongside minors by the CDF in sexual abuse cases.

Currently, a vulnerable adult is someone who “habitually lacks the use of reason.” O’Malley and Collins have both called for the definition to be broadened to include other victims, especially when sexual abuse it accompanied by an abuse of authority or power. Such a redefinition would include McCarrick’s alleged seminarian-victims.

If the Rome meeting next month sets out to narrowly treat the the issue of minors, and seems to exclude other victims of coercive sexual abuse, the figure of Theodore McCarrick might still cast a shadow over anything it tries to achieve.