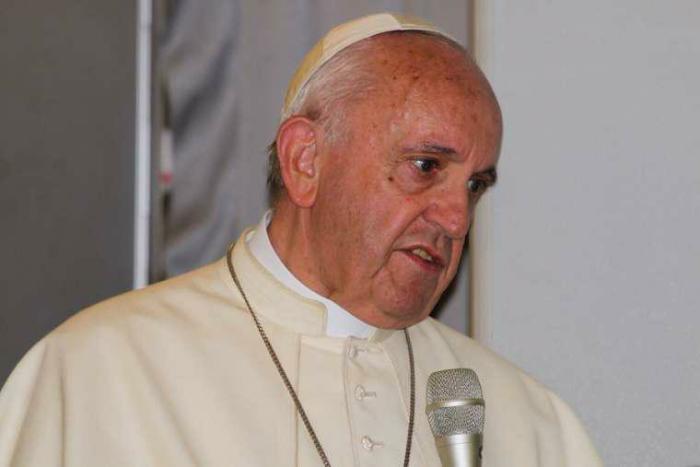 “When the Holy Father, referring to the dissolution of a Congregation, spoke of 'sexual slavery,’ he meant 'manipulation,’ a form of abuse of power that is also reflected in sexual abuse,” Holy See Press Office Interim Director Alessandro Gisotti said Feb. 6.

The clarification refers to a specific sentence in the pope’s response to a question regarding the sexual abuse of women religious by clerics.

Francis said Tuesday that, “Pope Benedict had the courage to dissolve a women’s congregation that had a certain level because this slavery of women had entered, even sexual slavery, by clerics or by the founder.”

The Holy See Press Office clarified that sexual manipulation had occurred within this women’s religious congregation, not actual sex slavery.

Gisotti later told CBS News that Pope Francis’ remarks referred to the Contemplative Sisters of Saint-Jean in France suppressed by Benedict XVI in 2013.

Sexual abuse of women religious by priests has been a recent subject in the women’s section of the Vatican newspaper, L’Osservatore Romano.

Recent reports have also suggested incidences of the abuse of women religious by clerics in Africa and Asia.

In India, a police investigation is ongoing into a case of an alleged abuse of a nun of the Missionaries of Jesus by a bishop. The religious sister has accused Bishop Franco Mulakkal of Jullunder of sexually assaulting her 13 times between 2014 and 2016.

The sister had said that she filed a complaint against Bishop Mulakkal in March 2018 with Cardinal George Alencherry, Major Archbishop of the Syro-Malabar Archdiocese of Ernakulam-Angamaly, and that he failed to report it to the police.

Mulakkal was removed from his responsibilities as Bishop of Jullundur, arrested Sept. 21, 2018, and then released on bail.

The pope said Feb. 5 he believes the problem is more common in some cultures than others but acknowledged that “there have been priests and also bishops who have done that. And I believe it may still be being done.”

The Church has “been working on this for a long time,” including through the suspension of clerics and the dissolution of some congregations involved in “corruption.”

“It’s a problem. The mistreatment of women is a problem,” the pope said. Asking for prayers, he added that he wants to go forward. “There are cases, yes,” he said, adding: “We are working.”

The issue was broached as the Vatican approaches a four-day meeting of the heads of bishops’ conferences and religious orders to discuss the sexual abuse of minors. The summit will be held Feb. 21-24.

In his response the pope also denounced the treatment of women as “second-class” and said it is often a cultural problem which in some countries can escalate even to the point of female babies being the targets of infanticide.

“I would dare to say that humanity still hasn’t matured” regarding the full equality of women, he said.