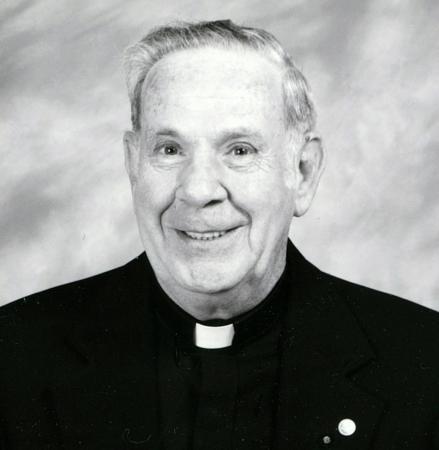 The third oldest priest of the archdiocese and the second to the last member of his seminary class of 1948, Father Patrick J. Kelly died at Massachusetts General Hospital, Boston, on Dec. 6, 2018. Born on April 3, 1924, in the Hub's Roxbury section, he was the only son of the late Patrick and Margaret (Mitchell) Kelly. He was predeceased by his only sibling, a sister Margaret (Kelly) Curry.

The family moved a few miles west to Brookline and Father Kelly attended and was graduated from St. Mary of the Assumption High School. He entered Boston College and after a year crossed Commonwealth Avenue to St. John Seminary. Archbishop Richard J. Cushing ordained him to the priesthood on May 6, 1948, at Holy Cross Cathedral and gave him his first assignment as an assistant at St. Joseph, Kingston. He was 23 years old on the day of his ordination. In those days, the newly ordained often received temporary summer assignments to parishes which had one or more mission churches. At that time, Kingston had several summer missions including those in Marshfield and Pembroke.

In the fall of 1948, Father Kelly was named an assistant at St. Joseph Parish in Woburn and in 1950 he was named an assistant at St. Ann Parish, Somerville. Somerville would have been closer in population, though not in geography, to his Brookline home parish. The pastor would have had at least three, if not four, assistants; there was a thriving parish school, CYO activities, etc.

In February 1958 he was granted permission to serve in the Navy Chaplain Corps, which he did on a full time basis for the next six years and after his return to the archdiocese in 1964 for an additional 16 years as a reserve chaplain. Between 1964 and 1980, in addition to his Naval Reserve chaplaincy, he was also an assistant at St. Mary of the Annunciation, Danvers (1964-1972); administrator, St. Mary, Holliston (1972-1975) and pastor, St. Mary, Lynn (1975-1980). At Lynn he succeeded Bishop John J. Mulcahy who had been ordained auxiliary bishop of the archdiocese in February 1975. The two knew each other from seminary days, as the bishop was ordained in 1947.

In addition to the usual parish responsibility and the oversight of a parish that had a church seating over 1,000 people; a rectory housing six or more priests; two convents, an elementary school and two high schools; he was still serving as a naval chaplain and as he told the Pilot, he played the clarinet and saxophone at the Village Green in Danvers.

In October 1980 he was named pastor of St. Ann Parish in Wayland, a parish that somewhat harkened back to his younger days in Woburn. Although only 56 at the time of his appointment, he would serve the next 20 years in Wayland, making it the longest of any of his priestly assignments. Cardinal Bernard Law granted him senior priest/retirement status in 2002.

Father Kelly enjoyed the fine reputation of a hard-working, dedicated, readily available priest. He was much liked not only by parishioners in his various parish assignments but also by the priests with whom he served. At his "retirement" he moved to St. Charles Borromeo, Woburn, at the invitation of Father Timothy Shea the parish's pastor. He actually served more as an associate there than a priest in retirement.

As noted above, Father Kelly was the third oldest priest of the archdiocese: Father John J. Connelly, '50 and Father Louis Bilicky, '49 are the two older than he; and Msgr. Albert Contons is now the sole surviving member of the class of 1948.