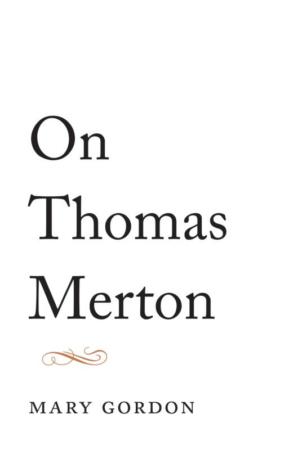 This is the book cover of "On Thomas Merton." The book is reviewed by Mitch Finley. (CNS)

To observe the 100th birthday in 2015 of one of the most popular and influential Catholic literary figures of the 20th century, the Columbia Rare Book and Manuscript Library asked Gordon to give a lecture to launch an exhibition of Mertonian papers. This book is the final result of that lecture.

"On Thomas Merton" joins the seemingly endless stream of books and articles on the Trappist monk who died in December of 1968. Gordon divides her look at Father Merton into four sections. The first is titled "Writer to Writer: But What Kind?" and looks at the conundrum of a cloistered monk who, Gordon writes, "entered an order devoted to silence, and yet his vocation was based on words."

Now and then, Gordon seems to enjoy dropping a word that most of her readers will find perplexing, such as "pateresque," "Europhilia" and "demotic." Readers may find themselves responding with an exclamation not infrequently used by characters in superhero comic books: "Wha?!"

The second topic Gordon addresses is "The Seven Storey Mountain." This, of course, is the title of Father Merton's most popular and best-known book, the best-selling autobiography published in 1947 when he was still a young monk. Gordon's method, here and in all four of her chapters, was to select sentences and passages from Father Merton's writing that captured her attention, share them with the reader, then comment either briefly or at some length.

The result is a small volume that breaks no new ground in Merton studies but does open the subject in ways that readers new to Merton will find enlightening and veteran Merton aficionados will appreciate. Gordon criticizes aspects of this book that Merton himself admitted in later life he found embarrassing.

Topic three for Gordon is "My Argument With the Gestapo," this being the title of Father Merton's only published novel, written before he entered the monastery. Appearing posthumously, in 1969, it seems a little odd that Gordon does not comment on the fact that Merton's original title for this novel was "Journal of My Escape From the Nazis."

At the very least, this makes Father Merton's novel the most accessible macaronic fiction in print today. Gordon likes "My Argument With the Gestapo," but she admits that it's a good thing Merton didn't continue writing in this vein, as he would never have become a famous and influential writer had he done so.

The final section of Gordon's literary expose is a 46-page look at the seven volumes and over 2,500 pages of Father Merton's published journals. Of all of his works, Gordon seems to appreciateFather Merton's journals most. "The journals are Merton's best writing," she asserts, "because in them he found the form that best suited his gifts."

Continuing the method established early in the book, Gordon lays out and comments on lines from the journals that she finds particularly appealing. And in doing so, she invites readers to take up Father Merton's own writing for themselves.

Finley is the author of more than 30 books of popular Catholic theology, including "The Rosary Handbook" and "What Faith is Not."