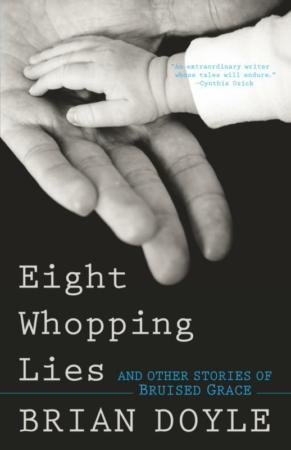 This is the cover of "Eight Whopping Lies and Other Stories of Bruised Grace." The book is reviewed by Kathleen Finley. (CNS)

Brian Doyle was a lover of words and stories -- probably in that order.

Unfortunately, we lost his talent too early when he succumbed to cancer earlier this year, but thankfully, we have one last collection of his essays, which were probably his main literary form, although he wrote novels, poetry and nonfiction as well.

Readers of Doyle need to watch and listen carefully for his verbal sleight of hand. He will be talking about one daily reality -- perhaps involving his children, whom he dearly loved and loved to write about -- and then, before you know it, you're in a place so deep that it nearly takes your breath away.

For example, after talking about playing chess with his son, he observes: "What we see of each other is only a bit of who we are. I want to invent new words for what we mean when we say the word love. Chess can be a wonderful word for that. Chess is a lovely word that can't be spoken. After the game we shake hands and I think never in the history of the world was there ever a man happier to be a father than me. Never in the whole long bristling history of the world."

Or when he's at Mass, thinking about his sons as they used to be at Mass, long ago when they were kids: "Sometimes by chance I am the first one back from Communion and I watch as they approach, wading gracefully through the shivered colors of the sun streaming through the windows. Time stutters and reverses and it is always yesterday and today. Maybe the greatest miracle is memory. Think about that this morning, quietly, as you watch the world flitter and tremble and beam."

Although there is some unevenness, which is inevitable in a collection of essays, Doyle draws heavily on his Catholic background.

And he observes about "The Sisters": "As far as I could tell they were every bit as committed and dedicated to the ancient mission assigned by the Christ as any priest or brother or abbot or bishop or cardinal or pope, and, in general, collectively, less liable to ego, crime, scandal and the hunger for secular power. So, I began to wonder as a boy, and still do, now more than ever before: Why are they not in charge of our church?"

Doyle teaches us plenty about the Incarnation, that God is made flesh in Jesus and in the little sacraments in the world around us.

He observes, after talking about an adventure at the beach with his brothers when he was younger: "The things that we remember the best, the things that matter the most to us when we remember them, are the slightest things, by the measurement of the world; but they are not slight at all. They are so huge and crucial and holy that we do not yet have words big enough to fit them, and have to resort to hints and intimations to even get anywhere close."

Thankfully, we had Doyle's eyes to see through, if even for a while.

His father, a well-respected Catholic journalist himself, said it well: "We are all enlightened by what Brian recognized and described -- inspired by what he believed and told us about God's world and people. We are all the better, more holy, I believe, for all of that, and for Brian Doyle to have been with us and among us."

Finley is the author of several books on practical spirituality, including "The Liturgy of Motherhood: Moments of Grace" and "Savoring God: Praying With All Our Senses," and taught in the religious studies department at Gonzaga University for many years.