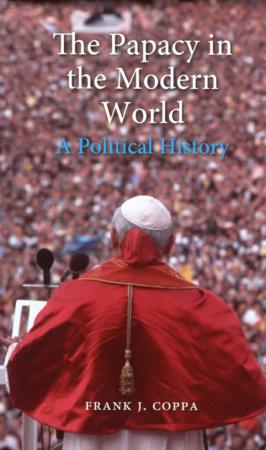 This is the cover of "The Papacy in the Modern World: A Political History" by Frank J. Coppa. The book is reviewed by Agostino Bono. (CNS)

Although popes are first and foremost heads of the Catholic Church, political issues historically have rivaled spiritual ones as topics of concern. Even today, when a pope no longer holds temporal power, he still wields international influence as head of a respected transnational organization applying moral values to hot-button world situations.

Even without political clout several modern popes have contributed mightily to world history. Polish-born Pope John Paul II, now a saint, was a major figure in the collapse of the Soviet Union and its East European communist empire. Pope Benedict XV saw his proposals for ending World War I initially rejected only to later form the basis of U.S. President Woodrow Wilson's 14 Points, which became the framework of an armistice.

"The Papacy in the Modern World" traces the history of papal involvement in politics from the French Revolution to the election of Pope Francis. It shows how popes have evolved from temporal rulers of the papal states, fighting to maintain their kingdom, to today's proponents of the need for moral and ethical values to guide political decisions.

Author Frank J. Coppa is well equipped to provide the narrative. He is a retired history professor at St. John's University in New York and author of several previous books on papal history. Although an academic, he uses everyday language and avoids lengthy quotes from other scholars, making the story an easy and flowing read.

Coppa shows how popes have faced various political challenges -- some with success while others wallowed in mistakes and miscalculations. One 19th-century pope even refused to allow a railway system to enter the papal states for fear it would bring in revolutionary troublemakers and rebellious ideologies.

The weakness of the book is that, as it covers over 200 years of rich papal history, it paints with a broad brush and doesn't deal in depth with some issues and doesn't get into the nuances of others.

Coppa credits Pope John Paul with being a major figure in the collapse of the Soviet Union and its satellites but provides little of the behind-the-scenes maneuvering of this pope who had years of experience dealing with communist officials before assuming the papacy. He also notes Pope John Paul's opposition to liberation theology because of its use of Marxist elements in its analysis of socioeconomic conditions but without the nuances. It doesn't mention the Vatican's two documents on liberation theology which while critical gave cautious approval to the thrust for social justice behind the theological movement.

At the same time, Coppa presents an objective pro and con about the popes he discusses and doesn't avoid taking on controversial issues such as the actions of Pope Pius XII regarding the Holocaust and Nazi Germany's anti-Semitic and racist ideology and practices. He is an expert on this, having written several previous books on Pope Pius, the Holocaust and World War II.

His view is that Pope Pius was opposed to these Nazi ideologies and practices but preferred a conciliatory rather than a conflictive approach to Adolf Hitler fearing that direct opposition would have made matters worse for the Jews and the Catholic Church under Nazi control. The author notes that the previous pope, Pius XI, did publicly condemn Nazi racism and anti-Semitism to no avail.

Although he says the final historical verdict is still out on Pope Pius XII, Coppa's bottom line is that more anti-Nazi actions by the pope would have enhanced his historical legacy but not changed the course of history.

Throughout the book, there is a subtle theme of papal resilience, flexibility and tenacity. Even when popes have made major errors of political judgment, subsequent popes have been able to change course to keep the office alive

Since the French Revolution popes have had to deal with two world wars and the Cold War. In addition they have had to face off with such tyrants as Napoleon, who imprisoned two popes; Mussolini; Hitler and Stalin. Yet today the papacy still exists while the regimes set up by these tyrants have evaporated.