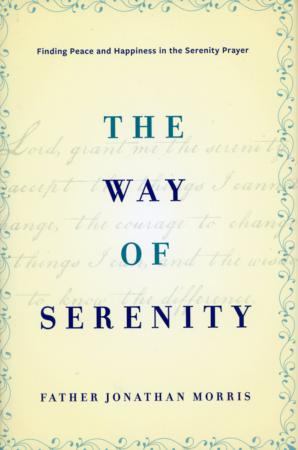 This is the cover of "The Way of Serenity: Finding Peace and Happiness in the Serenity Prayer" by Jonathan Morris. The book is reviewed by Jan Kilby. (CNS)

In "The Way of Serenity," Father Jonathan Morris examines the appeal and value of the popular "Serenity Prayer."

Its words are familiar to many: "God grant me the serenity to accept the things I cannot change, the courage to change the things I can and the wisdom to know the difference."

Father Morris, a Catholic priest serving in the Archdiocese of New York, is an analyst for the Fox News channel and former program director of the Catholic Channel on SiriusXM satellite radio. He also serves in campus ministry at Columbia University and is the author of two previous books.

In his new book, he shares some profound insight about the simple three-line prayer written by Reinhold Niebuhr, an American Protestant theologian.

He organizes the book's chapters into three parts, each devoted to one line of the prayer. Within each, he discusses what a petitioner requests in the line, why it is important, ways to attain it and barriers to doing so.

He believes the prayer has appeal because it "strikes a chord that transcends the boundaries of particular religious experiences to touch something intimately related to our common humanity."

Father Morris first became aware of the prayer's power when he heard it recited by those at an Alcoholics Anonymous meeting. "It was a calm cry in the darkness of their own insufficiency to a greater power to whom they had attached their will and hopes," he said. "It was the purest and most genuine act of self-abandonment to God's will I have ever witnessed."

The prayer soon became part of his spiritual practice.

In the book's first part, he analyzes what petitioners must accept that they cannot change. He cites these as the "unchangeable realities in our life." These include "parents, siblings, education, talent (or lack thereof), traumas and tragedies, our good and bad choices and their consequences," he says.

"We are asking God for the serenity to let go of the reins when hanging on to them is doing us no good anyway," he says. "If we let him, he will bring forth from our trial a greater good than anything we could ever imagine."

This requires trust in God in "working out the drama of our existence" and patience, he states.

In the second part of the book, he focuses on the desire of the prayer's petitioners for courage to change what they can. This process often means changing themselves first and "leading with mercy," he says.

Father Morris explains what can prevent this from happening. "Discouragement normally shows itself when we stop looking at God (for whom all things are possible) and become fixated on ourselves (who can do nothing without him)," he reminds readers.

Finally, he examines the prayer's line asking for the wisdom to know the difference between what must be accepted and what can be changed.

"Wisdom is not really about knowing many things, but rather knowing (discerning) what is important," he says.

Citing the advice of St. Ignatius of Loyola in his Spiritual Exercises, Father Morris says to "evaluate our present actions by considering what we will appreciate on our deathbed."

This can be difficult to know, he says, because God reveals his desires in "whispers" to "our conscience." But Father Morris asserts that wisdom ultimately means "to live for others, always" because "getting to heaven is what matters most."

Clergy and lay readers alike of all faiths should enjoy this inspiring book.

Kilby is a writer in San Antonio.