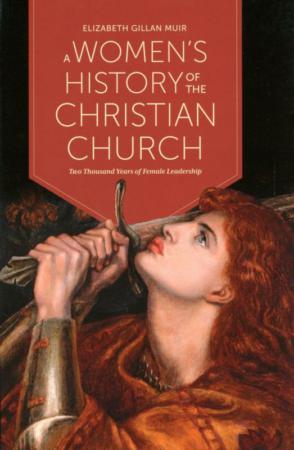 This is the cover of "A Women's History of the Christian Church: Two Thousand Years of Female Leadership" by Elizabeth Gillan Muir. The book is reviewed by Loretta Pehanich. (CNS)

If you're interested in reading weird and shocking tales, heretical teachings and unusual factoids, then this book will interest you. But it is a deep disappointment for those looking for a celebration of women's contributions to the Christian church. This book neither edifies nor uplifts. If anything, I felt increasingly angry reading about the many injustices perpetrated in the name of faith.

The attractive and timely subject will no doubt entice people to purchase a book more appropriately titled "Lascivious Legends of Women Who Claimed to be Christians" or "Outlandish Rumors About Unusual Women."

The author includes much material that is void of spiritual nourishment and not remotely Christian, including 11 pages devoted to witches, eight pages describing the Cathars, who believed in two gods, and five pages on the heretical Guglielmites. Yet St. Clare of Assisi gets one paragraph, and many prominent and influential Catholic women aren't even mentioned.

Muir's "selected women and events" timeline, for example, touts the first beauty contest (1887) but omits doctors of the church Hildegard of Bingen, Therese of Lisieux, Catherine of Siena and Teresa of Avila. These admirable women are briefly mentioned in the text, but it's odd they don't make the cut in a summary of women's history. Muir includes when bobbed hair and trousers were accepted for women, but makes no mention of St. Teresa of Kolkata's exceptional work and her Nobel Prize.

Much in this "history" evokes shame and incredulity. For example, she writes of the first pope: "Peter re-paralyzed his own daughter after he healed her so that she would not be a temptation to a man." Muir calls convents "'dumping grounds' for wealthy unmarriageable women."

Muir's disconnected paragraphs leave major gaps in history while highlighting odd religious groups. The book is void of unique feminine insights from women preachers, despite pages of aberrant tales of their activities. She even throws in their shopping lists. Lydia, who provided financially for Paul, and the women who cooked and laundered for Jesus on the road are barely mentioned.

Muir chooses to feature women devoted to "mystical pantheism," one who ate only once every five days and another who had raucous attacks of crying 14 times a day. Due to the lack of transitions between vignettes, this tome reads like an encyclopedia.

Muir is a Canadian history professor who served on the national staff of the United Church of Canada. Her body of work comprises children's picture books and two history books on Canadian topics. Despite pages and pages of footnotes, the author's scholarship is suspicious, and would take years to corroborate her assertions. Using imprecise and passive phrases, such as "it is believed," "it is considered," "it was said" and "reported to be," she repeats gossip as if it were fact.

Her loose definition of a heretic -- "someone who chooses to believe something different" -- is a great disservice. Rather than describing heresy as teachings contrary to Christ, whose name rarely appears in the volume, she promotes relativism.

This book cites examples of many women who misrepresent Christ's teachings. Some believed themselves to be Christ in female form. A high-born woman, always carried by slaves, headed to Bethlehem by boat as her young children wept on the quay. "Paula was frequently sick but proud, ... declared that she must disfigure her face to please Christ" and gave away so much money that she left her heirs "overwhelmed with a mass of debt." I skipped some pages because they simply were too salacious to endure.

This book disparages Catholic beliefs while perpetuating prurient heresies. Some traditions about Mary she labels as sourced from "books considered spurious." Yet she treats sources that fit her point of view as worthy of merit.

Despite whole chapters on the Foursquare Gospel Church, the Mai Chaza Church and others, the only chapter on Catholicism covers women who've left to form churches ordaining women.

If you'd like to be scandalized, be sure to read her chapter on a legendary Pope Joan. The lack of source material on this myth doesn't stop the author from repeating a story she says detractors may have devised as a way to mock the Catholic Church. "The ninth century was a very confused time in Rome," she writes, with "bawdy monks, scheming cardinals, cross-dressing saints, intrigue, melodrama, corruption and violence." It was not a high point for the church.

Muir includes some interesting pieces about the founders of the Seventh-day Adventists, the Salvation Army and women in Protestant denominations (the Methodists get 23 pages), but these do not rescue this laborious and skewed book. Her point of view is clear in her conclusion when she says that under Christianity, women "were put down, enclosed in convents, kept invisible, thrown in jail, or put under arrest, burnt at the stake or drowned."

She concludes that women were considered by men to be threats, meddlers and substandard humans. Misogyny, discrimination, subordination and disgust prevailed. She posits at the end that the church would have developed differently had St. Peter not hated Mary Magdalene.

I, frankly, would rather read about ways women have empowered and uplifted.

While it's true that female contributions to Christian history have been underreported and minimized, this book fails to correct this error or contribute to a positive view of feminine influence. Women throughout millennia have provided the bedrock infrastructure of home, hearth, labor and faith that allowed some men to write the history books which left women out.

Our church suffers currently from decades of unreported sexual abuse. We don't need a book that angers us further by telling bizarre stories about women. In an age of rage, this book foments further division. I look forward to reading some future volume that truly celebrates feminine contributions to the spread of genuine faith and growth in the church worldwide.