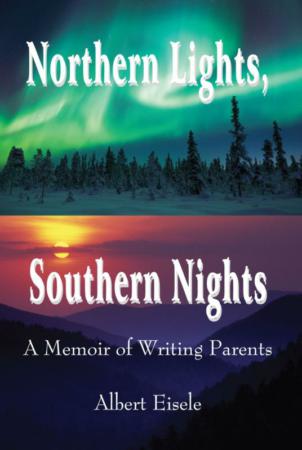 This is the cover of "Northern Lights, Southern Nights: A Memoir of Writing Parents" by Albert Eisele. The book is reviewed by Dolores R. Leckey. (CNS)

Tilling the earth and the art of literature are natural partners. Think of the Hebrew Scriptures, or "Gone with the Wind" or the work of the contemporary poet and novelist Wendell Berry to see the creative power inherent in farming the land and forming the word.

Some wonderful writing emerged from people involved in the rural life movement and its efforts to preserve such treasures as the family farm. Albert Eisele, a well-known journalist and author, has written a gentle, enlightening memoir about his parents who were both farmers and writers. In "Northern Lights, Southern Nights," Eisele brings to life the hard work and imagination of those who cultivate the land and who dream of all the possibilities therein.

The title refers to the unlikely alliance between two very different worlds: that of the Minnesota farm country and Southern gentility, Catholic style. Eisele's father, who later would write poems and short stories published in a number of well-regarded Catholic publications, left formal schooling at age 14 in order to help work the family farm. He accidentally became acquainted with a Southern journalist who earned a law degree on her own, and who wrote columns for the Tennessee newspapers in her community. Thus the title: "Northern Lights" (pure Minnesota), "Southern Nights" (the culture of the South). They come together over "the word," columns written by Southern Susan and wondered about by the farmer, Albert Sr.

Because the author's parents preserved papers of all kinds -- first drafts of stories, rejection slips, poems that were published and unpublished, columns on all kinds of subjects -- we are given an open window onto life in rural/literary America. It is a gift to history and to all who wonder about the writing life. How does it happen? How does one persevere? What does it really reveal?

Another Minnesotan, poet and memoirist Patricia Hampl, writes that the purpose of a memoir is to reveal a slice of history, giving us, the readers, a sense of what it was like then. "Northern Lights, Southern Nights" does this;but it also reveals, ever so subtly, the virtues needed for life and literature: humility, hard work, perseverance, hope and humor. One of the surprising gifts of this memoir is that pieces of original writing are included. The short story "Easter Duty" is worth the price of the book.

An unusual summary of "Northern Lights, Southern Nights" comes from Auxiliary Bishop Robert F. Morneau of Green Bay, Wisconsin, himself a Midwestern poet and essayist. When he reads a book he usually writes a poem about it. And so,

"Met and married they did,

A southern belle and a Minnesota farmer

Now one of the sons continues their writing passion,

In a labor of love,

By tracing his parents' lives:

Their meeting, their joys and sorrows,

Their stewardship of the land and words.

These writing parents produced their own northern lights;

We are the beneficiaries."