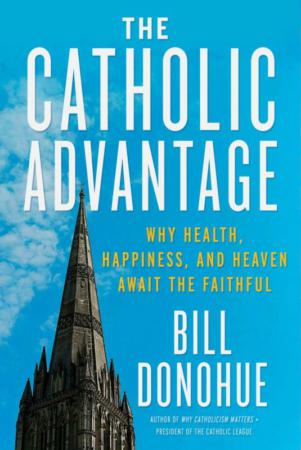 This is the cover of "The Catholic Advantage: Why Health, Happiness and Heaven Await the Faithful" by Bill Donohue. The book is reviewed by Brian T. Olszewski. (CNS)

There are few, if any, surprises when one reads a Bill Donohue book. The president of the Catholic League for Religious and Civil Rights is a promoter of Christian living in general and the Catholic faith in particular; he defends both when they are attacked by government, media, organizations, academia and individuals.

"The Catholic Advantage" is an examination of what Donohue terms the "three B's of Catholicism -- beliefs, bonds and boundaries, which in turn leads to achieving the three H's -- health, happiness and heaven." Catholicism, he contends, "offers the best guide" to acquiring those H's.

To make his point, Donohue uses two models. The Catholic vision is comprised of saints, priests and nuns, collectively described as "a useful index of Catholicism in practice." He compares that model to a secular model comprised of intellectuals who "reject traditional morals values, are disdainful of God and are utopian in thought," and Hollywood celebrities "known for living hedonistic lives, hostility to conventional norms and penchant for self-indulgence."

Lest one think that "The Catholic Advantage" is all Donohue's opinion, he backs his statements with data culled from a variety of researchers, most notably Dr. Harold G. Koenig, director of the Center for Spirituality, Theology and Health at Duke University Medical Center. Throughout the book he makes references to and/or quotes Pope Francis, Pope Benedict XVI, Blessed Teresa of Kolkata, Archbishop Fulton J. Sheen, St. John Paul II and other saints.

In short, as he builds a case for why one should adhere to the three B's, he fortifies it with reputable data and the words of faith-filled Catholics.

If the data and members of the Catholic model aren't convincing, Donohue contrasts them to those in his secular model. He calls Mother Dolores Hart "the epitome of happiness," while describing Elvis Presley, with whom the actress-turned-Benedictine nun appeared in two movies, as "miserable inside." Other examples of unhappiness, as a result of their not adhering to the three B's, include Leo Tolstoy and Ernest Hemingway.

Much like his friend, New York Cardinal Timothy M. Dolan, Donohue, head of the Catholic league since 1993, is wont to tell people what the church stands for, i.e., the three B's, rather than what it opposes.

Whether one agrees with Donohue's conclusions, one thing is undeniable: He is consistent. "The Catholic Advantage" touches upon similar themes and is written in the same tone as "Secular Sabotage: How Liberals Are Destroying Religion and Culture in America" and "Why Catholicism Matters: How Catholic Virtues Can Reshape Society in the Twenty-First Century," published in 2009 and 2012, respectively.

One can neither dispute Donohue's relentlessness in making the case for what is basically doing good and avoiding evil, nor can one question that he is a pre-eminent apologist for Catholicism. Thus, his matter-of-fact conclusion is what one should expect:

"In education, the arts, the media, and the entertainment industry, there is an ugly animus against religion. Yet religious Americans made for the best citizens, and religious institutions benefit everyone, thus making it plainly irrational not to husband their resources. ... In terms of social capital, there is no better agent than religion.

"If the key to the three H's is the exercise of the three B's, then they need to be trumpeted, cultivated and subsidized. It makes no sense whatsoever to pretend that we do not know what works. Quite frankly, it is in everyone's interest to make the Catholic advantage more accessible to the public."

Readers who agree with Donohue will welcome the affirmation he provides. Those who take issue with what he says and the conclusions he reaches can expect to be provoked, even disturbed. In fact, expect nothing less.

Olszewski is the general manager of the Catholic Herald, publication serving the Catholic community in southeastern Wisconsin.