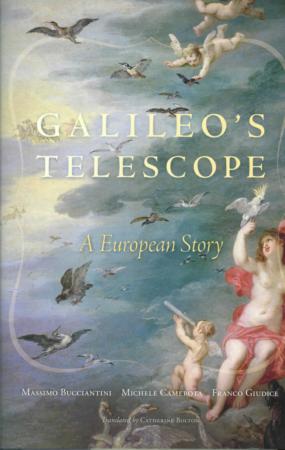 This is the cover of "Galileo's Telescope: A European Story" by Massimo Bucciantini, Michele Camerota and Franco Giudice, translated by Catherine Bolton. The book is reviewed by Brian Welter. (CNS)

As reflected in the subtitle, "A European Story," the authors of "Galileo's Telescope" present Galileo's astronomical discoveries of 1609-11 -- resulting from his modification of the Dutch "spyglass" -- as a European phenomenon that was as much philosophical and cultural as scientific.

The continent's leading political and social actors, in fact, desired and often received one of the great mathematician's telescopes, the best in the world, more than astronomers did.

The three authors' detective work, sifting through letters such as those between Galileo and Johannes Kepler, helps us see the strongly opinionated personalities involved in the great upheaval. As they note, Galileo gave to the world a new sky, one no longer pure and populated by angels and heavenly spheres, but one as corrupt and prone to decomposition as the Earth. The authors succeed in conveying the revolutionary nature of Galileo's work.

The telescopes he sent throughout Catholic Europe (dispatching none to the Protestant Kepler) allowed people to see with their own eyes his findings, which not only included a moon of hills and valleys, but the later discovery that Venus orbited the sun. The telescopes actually appeared on paintings, including one by Jan Brueghel the Elder, wherein people and artists paid tribute to the new technology and wished to be associated with it. Europeans were technophiles.

The use of letters exchanged among the movers and shakers of the time also illustrate just how quickly the discoveries were coming, upending people's perspectives on nature, anthropology and philosophy.

The authors capture the pan-European nature of the spyglass and Galileo's astronomical discoveries via their anecdotes and character sketches of the many players, such as Cardinal Robert Bellarmine and Emperor Rudolf II of the Holy Roman Empire.

The cardinal feared the upsetting of the Aristotelian-Ptolemaic system whose astronomy paralleled the biblical one. Like many Jesuits at the Collegio Romano, whom Galileo tried to convince while on his Roman speaking tour that included seeing a very supportive Pope Paul V, the cardinal feared that people would lose faith upon the new theories' widespread acceptance. These theories were to remain mathematical only, as Copernicus' theories had.

The eccentric emperor took a completely different stance from Cardinal Bellarmine, as the authors explain: "Rudolf's passion for 'secrets, charms, sorcery, sleight of hand, alchemy, painting and sculpture'" and his "predilection for anything to do with astrology, and perhaps even necromancy," was well known. "Then there was his obsessive attraction for any type of human invention, any kind of arcana and automata, which he would have people seek around the world to add to his already rich Kunst-Wunderkammer, the most famous and monumental collection of artwork and curiosities in Europe, ... shown to only a fortunate few."

Not surprisingly, Rudolf was as keenly interested in the telescope and the revolutionary heavenly perspective as certain sectors of the church were against it.

The diversity of opinions and voices, all loudly debating the fresh reality, outlines the lively, intertwined scientific, philosophical and religious culture of the time. The authors show that Galileo, clearly no fool, undertook his travels around Italy, most importantly to Rome, knowing the political and cultural implications of his science. He sought "cultural hegemony," no less.

"To gain credit, however," the authors note of his trip to Rome, "the proposal needed the support of institutions that could embrace and substantiate the new theories, embodying them in the various shared ways of 'practicing science' and a common vision of natural reality and knowledge." Confirmation from Rome, the authors note, would have given his discoveries "universal value."

While the authors never shy away from depicting ecclesiastical authorities opposing the new science, they avoid using the Galileo episode to attack the church, as so many people have done throughout the years. Rather, they show the churchmen's sincerity, concerned and unsure as they were of how to absorb the new discoveries, not only for themselves, but for Europe's Christians.

With the Reformation still fresh and unsettled, the church understandably didn't wish for more unnecessary upheaval.

"Galileo's Telescope" opens the door to a whole society going through deep transformation. Despite more than a few tedious sections dealing with technology or with detailed reactions and letters from unknown though important figures of the day, the book will be satisfying to anyone wanting a wider cultural perspective on this most unsettling time.