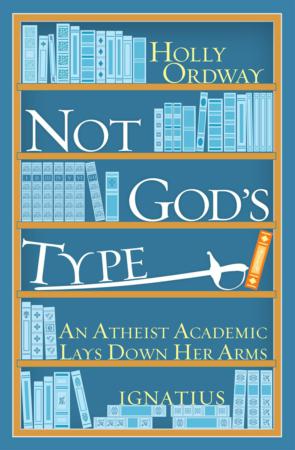 This is the cover of the book "Not God's Type: An Atheist Academic Lays Down Her Arms" by Holly Ordway. It is reviewed by Nancy L. Roberts. (CNS photo courtesy Carmel Communications)

Holly Ordway, author of "Not God's Type," was a well-educated English professor who dismissed belief in God as so much superstition. While her family was not hostile toward religion and even adopted some cultural Christian practices such as playing Christmas carols, as a child she neither opened the Bible nor attended church.

She remembers reading C.S. Lewis' "The Chronicles of Narnia" and J.R.R. Tolkien's "The Lord of the Rings," both of which made a deep impression on her. But she "completely missed" the novels' Christian themes.

By early adulthood, she was comfortably ensconced in what she describes as a "fortress of atheism." She writes, "I held that I was the product of blind chance working over millions of years, a member of a species that happened to be more intelligent than other mammals but was not unique."

Nor did she believe that human beings have souls. "I thought that when I died, my consciousness would simply switch off, and that the only mortality in store for me was that of my body decaying and returning its constituent atoms for other living beings to use; sometimes I even thought that was a beautiful and consoling prospect."

Still, her recounting of her earlier years as an atheist underscores the inherent darkness of this perspective.

Above all, Ordway felt she was not God's type. But in college something stirred when she began to study English literature and the great Christian poets such as T.S. Eliot, Jesuit Father Gerard Manley Hopkins, John Donne and the Rev. George Herbert, an Anglican priest. Later, for her doctoral thesis in English literature at the University of Massachusetts at Amherst, she focused on Tolkien.

Ironically, even though she was still an atheist who had rejected the possibility of any rational explanation for faith, God was reaching her, she says, through her imagination. Little by little, over the course of years, tiny seeds were planted that began to sprout.

For instance, when she took a job as an English professor in California and started teaching her students about Father Hopkins and other Christian poets, she was struck anew by how deeply meaningful this literature was. No longer could she dismiss the poets' central beliefs as mere superstition or ignorance; she felt compelled to explore their basis. With encouragement from her fencing coach, a deeply committed Christian, Ordway applied her considerable intellectual gifts to researching the origin of Christian faith.

Her memoir, an expansion of her 2010 first edition, is a richly detailed, beautifully written account of the spiritual journey that compelled her to choose Christianity, and then, a few years later, Catholicism. It is an honest and moving conversion narrative that underscores the pivotal role of great Christian literature in defeating Ordway's staunch atheism. It is the story, as she puts it, of "the importance of imagination as both the catalyst and the foundation of my rational exploration of the faith."

Reading authors such as Father Hopkins, G.K. Chesterton and Lewis (especially his classics "Mere Christianity" and "Surprised by Joy") tipped the balance for Ordway. These and other texts, such as Gary Habermas' "The Risen Jesus & Future Hope" and retired Anglican Bishop N.T. Wright's scholarly tome, "The Resurrection of the Son of God," propelled her to undertake an exploration of the rational, historical claims of Christianity, including the Resurrection. What she discovered led her to embrace Christianity unequivocally.

When her Christian coach urged her to go to church and seek baptism, Ordway at first resisted. "The prospect of going to church was distinctly unappealing," she confides. "As for baptism, I had only the vaguest idea of what that might entail, but I feared the worst. It almost certainly involved getting publicly fussed over in front of a large group of strangers; the whole thing would probably be kitschy and embarrassing."

Ultimately, Ordway recognized that she had indeed converted to Lewis' "mere Christianity"; but she "could not stay there, reading the Bible in a corner by myself." She now felt drawn to choose one of the many rooms that, as Lewis explains, open out from the main "hallway" of Christianity -- such as Methodist, Lutheran, Catholic, Baptist and so on.

After participating meaningfully in evangelical Protestant and Anglican worship, she was eventually drawn to Catholicism for many reasons, including its scriptural and doctrinal truth and its fit with her own theological conservatism. Quite to her surprise, she writes, "being Catholic has proved to be far more than an ecclesiological or doctrinal commitment. It is, rather, a voyage of discovery involving my whole person: spiritual, physical emotional, intellectual."

Today, Ordway is an English professor who directs the master's program in cultural apologetics at Houston Baptist University, specializing in study of the writings of Lewis, Tolkien and Charles Williams. Her memoir is not itself an apologetic, but a thoughtful, heartfelt account of her pursuit by the Hound of Heaven. It will inspire all kinds of readers, from cradle Catholics to new converts -- indeed, anyone who is a seeker, even if yet unchurched.

Roberts directs the journalism program at the State University of New York at Albany and is the author of "Dorothy Day and the Catholic Worker" and other books.