ROXBURY — Summer is supposed to be a quiet time for Catholic schools, but not so for St. Patrick School in Roxbury which was burglarized twice and vandalized all in the span of a week.

In a separate incident the previous week, vandals threw rocks at windows on the back of the building, breaking nine of them.

“That the school would be targeted seems so unfair. It does so much good for people and kids in the area, and it is a safe school,” said Father Waldron. “By something like this happening, they really besmirch our reputation and give a black eye to the community, which just isn’t fair.”

Police are investigating but currently have no suspects, he said.

“They came and they fingerprinted the whole place,” he added.

Father Waldron said that he hopes all the items will be replaced before school opens on Sept. 6 or soon after.

“There will be no loss in education,” he said.

The school, which dates back to the 1800s, enrolls about 200 students in kindergarten through eighth grade.

Insurance coverage as well as donations from those who have heard of the school’s plight will cover the expense. Many people have offered to donate new computers. The response has been “amazing,” Father Waldron said.

“A number of people sent in cash donations,” he added. “That’s been extremely beneficial.”

Help has also come from a Boston policeman who approached Father Waldron on Aug. 12, saying that he did not like one of the priest’s quotes in the newspaper.

Father Waldron had said to a reporter about the thieves, “They came, they saw, they conquered.”

The policeman told Father Waldron, “That’s not right because they don’t win. The good people will win,” he said. The policeman then offered to help the school get new equipment and said that it is the police department’s job to help victims out as well as catch the thieves. 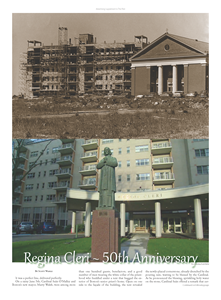