WAKEFIELD — If just 10 drivers in every town in Massachusetts were willing to support life on their bumpers, the new Choose Life license plates would become a reality in the Commonwealth, according to Merry Nordeen, founder of the non-profit organization Massachusetts Choose Life.

The specialty license plate would allow drivers to financially support “non-governmental, not-for-profit agencies not involved in abortion services that offer counseling and services to pregnant women,” she said.

For three years, this mother of six has worked tirelessly trying to garner support for the Choose Life license plate, setting up tables at various Massachusetts Citizens for Life events, as well as attending the Men’s and Women’s Conferences.

After three years of trying to spread the word, Nordeen’s crusade is moving forward.

With roughly 1,000 people signed up as potential owners of the plate, the Wakefield resident contacted her state representative in order to see how to formally apply for the specialty plate. His answer surprised her.

“He told me it was no longer a legislative process, that the process had changed from the past,” Nordeen recalled.

Nordeen then set up a meeting with the Registry of Motor Vehicles to move forward with the Choose Life license plate.

“They gave me quite a lot of valuable information,” she said, “and made sure I was in compliance with everything” before accepting applications.

In order to “start a little excitement,” Nordeen sent out a mass e-mail to people who had indicated they would be interested in purchasing the specialty plate.

A flurry of activity followed.

“It was a humbling experience,” she admits now, because she thought the applications would come pouring in, but that has not been the case.

To date, Nordeen has received 184 paid applications, and, although she believes “it’s not going to be a quick thing,” she is “confident that it will eventually happen.”

“I think when people just read something, it doesn’t present itself as well as when I speak to them in person,” she muses.

“We are so inundated with materials, with e-mails and junk mail, that it’s hard to penetrate,” adds Nordeen.

So for now, “the efforts continue,” she added.

In the near future, Nordeen will be speaking on the radio program “In Season and Out of Season,” hosted by Father Tom DiLorenzo.

She is also entertaining a possible design change, after speaking with various pro-life supporters who disliked the proposed design of the plate.

To help with the design change, Nordeen has contacted pro-life artist Gary B. Clark.

Clark, who is based in North Carolina, was “very enthusiastic” about creating a license plate that would appeal to a wide audience, according to Nordeen.

“I’ll just continue going on, confident that sooner or later we will be able to issue these plates,” Nordeen declared.

If passed, the cost of the plate would be $40 in addition to the regular charge for getting a license plate — the same as that of every other specialty plate in Massachusetts. Of that fee, $12 would go to the state. The other $28 would be distributed to groups designated by Massachusetts Choose Life.

Currently there are 12 specialty plates offered by the Commonwealth. 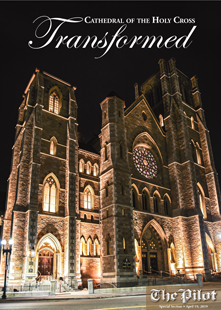