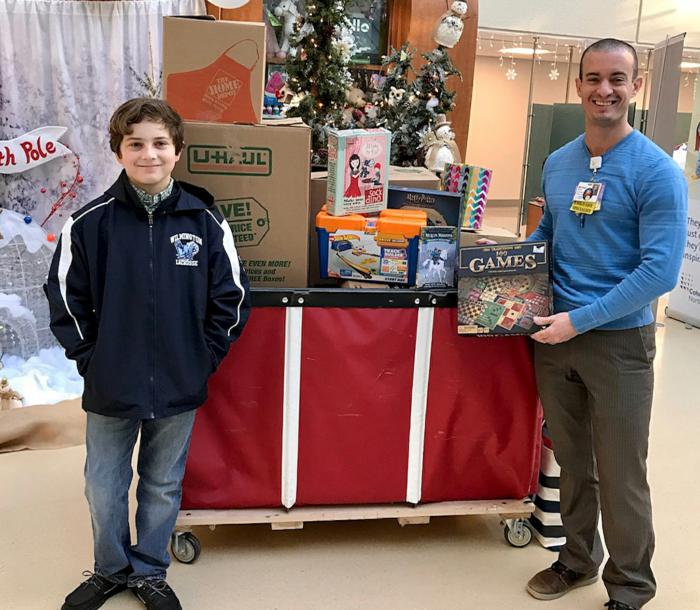 Thomas Pote, a student at St. Joseph School in Wakefield, is pictured with the head of the Child Life Therapy program at Cohen Children's Medical Center on Long Island as he presents donated toys. Courtesy photo

WILMINGTON -- Months after suffering a traumatic brain injury, Thomas Pote, 11, wanted to find a way to give back to the hospital that saved his life.

On June 29, Thomas was in Long Island, New York, for a lacrosse tournament. In the evening, while he and his teammates were playing near the pool at their hotel, he slipped and hit the side of his head on the tile floor, causing a fracture that hit a major artery.

His mother, Paula Cushing-Pote, did not know how serious the injury was but decided to take him to a hospital. A CAT scan at Nassau University Medical Center revealed a four centimeter brain bleed. Thomas was then transferred by ambulance to Cohen Children's Medical Center, where he received life-saving surgery in the early hours of June 30 to remove the blood clot and stop the bleeding.

The hospital's intensive care unit had an "unbelievable" program, Cushing-Pote told The Pilot Dec. 11. Every day, volunteers from the Child Life Therapy program would play with young patients, giving parents a break if they needed one, and providing toys, crafts, board games, and movies. They supplied Thomas with Legos to keep his brain active while he recovered from his surgery. Ronald McDonald House of Long Island provided a room for Cushing-Pote and other family members to stay in.

Thomas remained hospitalized until July 4, after which they were able to return to their home in Wilmington.

"We had realized we were very, very lucky that he was alive. He shouldn't have survived what he'd gone through," Cushing-Pote said.

After coming home, she said, "we had felt that we need to give back for everything the hospital has done for us."

They decided to collect toys for Child Life and monetary donations for Ronald McDonald House.

"His hope was that all these toys and these donations (would) help other children and make their stay just as comfortable and great as his experience was," Cushing-Pote said.

She reached out to St. Joseph School in Wakefield, where Thomas was entering the sixth grade, for help raising funds and collecting toys.

Each month, the school has a "casual-for-cause" day when students can wear clothes other than the school uniform if they donate a dollar to a designated charity. In September, for the first "casual for cause" of the school year, students paid $2 each and wore green clothes, which represented traumatic brain injuries and also happened to be Thomas' favorite color. This collection raised $305, and the school's gym teacher donated another $100.

They collected enough toys, board games, and books to fill a large container, but Thomas expressed the hope that they could fill their family pickup truck. So, Cushing-Pote also posted requests for donations on the Wakefield and Wilmington community Facebook pages. They received "a good amount" from both communities, including a contribution from Northeastern Fence and Supply Corporation in Saugus that brought the total monetary donation just past $1,000.

"We're just extremely proud of the community that we live in and how total strangers had no problem donating and it felt really good to be able to come together as a community and help out a little boy's dream," Cushing-Pote said.

They were able to see the nurses and doctors who cared for Thomas, including the surgeon who performed his brain surgery. Thomas and his mother gave them a thank you card as well as homemade rosaries blessed by their pastor, Father Ronald Barker of St. Joseph Parish.

"(At) most hospitals, most of the patients don't come back," Thomas said, adding that the doctors and nurses "were happy to see me there."

At that time, Cushing-Pote said, the Child Life Therapy program had no toys to give the children, so they appreciated the donations.

"I felt good about giving back," Thomas told The Pilot.