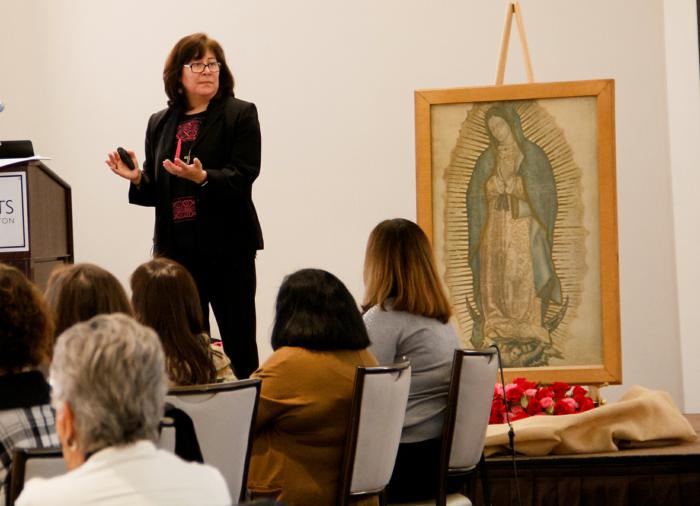 NORWOOD -- The Pro-Life Office of the archdiocese held its annual Women Affirming Life celebration on Dec. 14 at Four Points by Sheraton.

About 225 people attended the event, including representatives from four orders of women religious: the Sisters of Life, the Daughters of St. Paul, the Sister Disciples of the Divine Master, and the Sisters of Notre Dame de Namur.

The morning began with a Mass celebrated by Cardinal Seán O'Malley.

In his homily, the cardinal spoke about the importance of compassion and solidarity, which he called "the antidote of abortion."

The gospel reading for the Mass told the story of the woman caught in adultery. Cardinal O'Malley compared her to women experiencing crisis pregnancies, who often feel "overwhelmed, alone, afraid, confused, judged."

He said that, although the attendees were present because they want to protect the unborn, "we can save those babies only by saving the mothers. When they experience God's mercy, then they will be capable of showing mercy to their children. The pro-life movement has to be about saving mothers."

He noted that "many people think of us Catholics as a people of no -- don't do this, don't do that. In reality, we are a people of yes, yes to God, yes to life, yes to compassion for the poor and suffering."

The Mass was followed by a buffet breakfast. During the meal, representatives of the Catholic Daughters of the Americas presented Cardinal O'Malley with two checks, one for Pregnancy Help's "Fund for the Unborn" and one for a charity of the cardinal's choice.

In 1998, then-state deputy Marie Treggiari began Pennies for the Unborn, a fundraising campaign that has since contributed over $150,000 (more than 15 million pennies) to archdiocesan funds for the unborn.

The keynote speaker at the breakfast was Sister Barbara Gutierrez, SNDdeN, who gave a presentation on "Our Lady of Guadalupe: Our Companion on the Journey of Life."

Sister Barbara spoke about her own relationship with Our Lady of Guadalupe as well as the historical context and cultural significance of the apparitions and miraculous image.

She said that when she was growing up in Mexico City, her mother turned to Our Lady for guidance during earthquakes. As a student, Sister Barbara prayed to Our Lady about her exams. When she was discerning religious life, she was surprised to learn that St. Julie Billiart, the founder of the Sisters of Notre Dame de Namur, had owned a medal of Our Lady of Guadalupe. Sister Barbara took this as an indication that "Our Lady of Guadalupe has been with us since the beginning of our congregation."

She explained that the indigenous people of present-day Mexico had a very different understanding of prosperity and success than the Europeans who colonized them. The indigenous believed a good person was one who was connected to their community and environment, whereas the Europeans championed people who conquered others to obtain what they wanted.

Sister Barbara talked about how the Spanish colonized Mexico and dehumanized the indigenous people, making them "aliens in their own land." The Spanish employed such cruel means as attack dogs and mutilation to punish the native peoples.

By the time Our Lady of Guadalupe appeared in 1531, Sister Barbara said, "the psyche of the Indians was totally gone, transformed." This was why St. Juan Diego knew no one would believe his account of seeing her, and why he called himself "worthless."

The image of Our Lady on St. Juan Diego's tilma bears cultural symbols and artistic styles from both Europe and the Americas, which gave her credibility with people of both continents. She is depicted as mestiza, of mixed Mexican and European ancestry.

Sister Barbara said this was "the appearance of a new civilization."

Sister Barbara spoke about how Our Lady of Guadalupe permeates Latino art. In addition to pictures in her slideshow, she showed the attendees a few items she had brought that were decorated with images of Our Lady: a reusable shopping bag from Wal-Mart, a notebook she used as a student, and the socks she was wearing.

She explained that though some may see this use of Our Lady's image as disrespectful, "For us, she is there with us. It's not a lack of respect. She comes with us wherever we go."

Sister Barbara called Our Lady of Guadalupe "a sign of life."

"She came to save the Indians, to give them human dignity again. She continues to walk with the people who cross the border," Sister Barbara said.

For a closing prayer, volunteers passed out roses to each table, and Sister Barbara invited everyone to talk to the people at their table, choose a petition, and have someone from their table bring the rose and a prayer card to place before the reproduced image of Our Lady of Guadalupe.

Echoing the cardinal's words about being "a people of yes," Sister Barbara encouraged the attendees to "say yes to Our Lady," as St. Juan Diego did, and to trust that people will believe their message as they advocate for life.