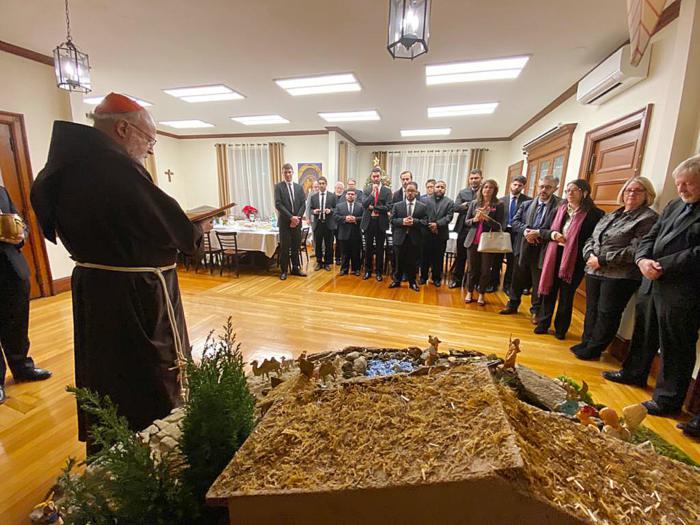 In the early evening of Thursday, Dec. 12, Cardinal O'Malley went to the Redemptoris Mater Seminary in Brookline for the annual meeting of the Board of Directors there. Pilot photo/CardinalSeansBlog.org

On Saturday, I went to Emmanuel College to celebrate the Mass marking the closing of the college's Centennial Year celebrations.

Emmanuel was the first Catholic women's college in New England, founded by the Sisters of Notre Dame de Namur one year before the 19th amendment was enacted, granting women's suffrage. In recent years, it has become coed but, for most of its history, it was a Catholic women's college. Many of the sisters, students and alumni were there, and the faculty was dressed for the occasion in their academic robes. The Mass was held in the gymnasium to accommodate the large crowd.

It was a very beautiful celebration in thanksgiving for the 100 years of Catholic education at Emmanuel College.

After many years of excellent service in the Vocation Office, Father Daniel Hennessey has now become pastor of two parishes in the archdiocese: St. Rose of Lima in Topsfield and St. Agnes in Middleton. He was installed as pastor in Topsfield on Saturday by Bishop Robert Hennessey, and it was my joy to go to St. Agnes to install him as pastor there on Sunday.

There was a great crowd, and it was wonderful to see the whole community so excited to welcome their new pastor.

On Monday, I attended the wake of Daniel Kennedy, Sr. at St. Joseph's Parish in Needham, the parish from which we buried his son, Father Daniel Kennedy, Jr. Many of the family, friends, and loved ones of Mr. Kennedy were present with us for the prayer service at the start of the wake.

Dan Kennedy was a very active parishioner at St. Joseph's and a great supporter of St. John's Seminary -- he would come to every ordination of deacons or priests. He also published a beautiful biography of his son, Father Dan, who, although was a priest for such a short time, made a great impact on the entire faith community of the archdiocese.

On Tuesday, I gathered with our recently ordained priests for ongoing formation at the Pastoral Center.

As I have noted, the group has greatly expanded this year with the ordination of 14 new priests. This was the first meeting for Father Francis Pham, who was just ordained less than two weeks ago. So, we had a cake to welcome him.

It was also the first time we celebrated the feast of Our Lady of Loreto in the calendar of the Church. So, after our lunch and a long discussion about the Year of the Eucharist and other aspects of ministry, we began our Holy Hour with the Litany of Loreto.

On Thursday afternoon, we had one of our regular meetings of the Massachusetts Catholic Conference, the public policy arm of the Church in the Commonwealth.

As always, it was an opportunity to discuss different issues facing the Church in Massachusetts and hear reports from different committees as well as the director, Jim Driscoll.

In the early evening, I went to our Redemptoris Mater Seminary in Brookline for the annual meeting of the Board of Directors there. It was wonderful to hear reports of the seminary's continued progress, and we are so grateful to the rector, Father Tony Medeiros, for all his fine work.

I was also very happy to bless the seminary's lovely creche during my visit.

After the dinner, I returned to the cathedral in time to greet the parishioners who were holding a very elaborate celebration for the feast of Our Lady of Guadalupe.