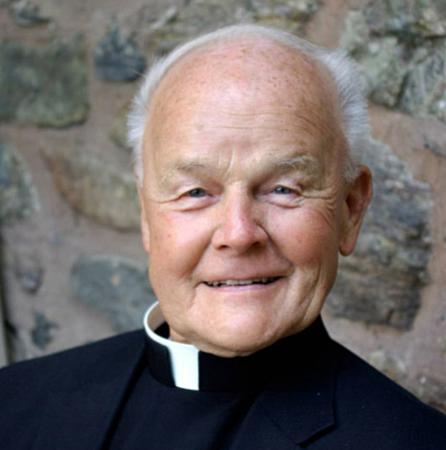 For more than 40 of his more than 60 years of priestly ministry in the Prelature of the Holy Cross and Opus Dei as it is now known, Father Richard "Dick" Rieman was a fixture in the archdiocese.

Born in Chicago in 1925, a son of the late John and Catherine (Collins) Rieman. He entered the United States Navy after high school and was a flyer during the Second World War. On returning to the Windy City, he worked as an on-stage productions crew and at the Greta Chicago Railroad Fair (1948-1949).

He was awarded a BS in sociology from DePaul University in 1951. It was during his studies that he met Fathers Joseph Muzquiz and Salvador Ferigle both of whom had arrived in Chicago and opened the first apostolic outreach of Opus Dei in the United States. Inspired by their example, he joined Opus Dei and in 1954 went to Rome to prepare for ordination to the priesthood. He studied theology at the Pontifical University of St. Thomas Aquinas (the Angelicum) and was awarded a doctorate in Canon Law in 1957; the following years he was ordained to the priesthood.

He returned to the USA late in 1958 and landed in the nation's capital, he was instrumental in developing various apostolates there, notably The Heights Study Center, later the Heights School Potomac, Md.

He arrived in the archdiocese of Boston and was chaplain at two Opus Dei Residences: Trimount (for men) and Bayridge (for women), both located originally in Boston's Back Bay; Trimount moved with Father Rieman to Chestnut Hill; while Bayridge remains in the Back Bay. With the founding of Montrose School, Father Rieman had the three apostolates that would be his intense pastoral care over the remainder of his life.

His arrival in the archdiocese reunited him with his mentors: Fathers Muzquiz and Ferigle, who had been the founding fathers of Opus Dei apostolates in the archdiocese. During his more than 40 years here, other priests of the prelature have come and gone, but Father Rieman remained.

He was a gregarious and warm hearted man; he was above all a Christian gentleman. It was easy to like him. He was confessor to countless students at the residences and Montrose School. He was also a spiritual director for priests of the archdiocese and ever ready to come to penance services in area parishes at the drop of a hat.

A sports fan, especially of local college teams and most especially of the Harvard hockey team, he was a familiar face to fans at collegiate rinks of Boston College, Boston University, Northeastern, and the Boston Garden. Everyone knew he was there for Harvard but he never "lorded'' it over visiting or home teams or their fans.

Father Rieman's funeral Mass was celebrated Dec. 7 at St. Mary, Dedham. He was buried in St. Joseph Cemetery, West Roxbury; reunited in death as he had been in life with his mentors Father Muzquiz and Ferigle.